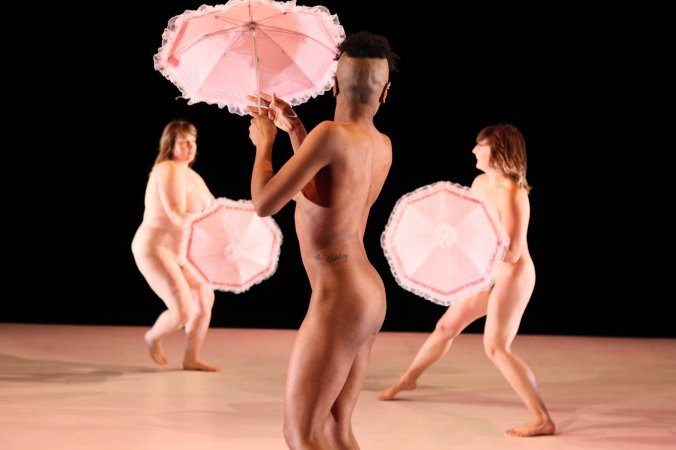 At the beginning of the Young Jean Lee Theater Company’s production of “Untitled Feminist Show,” in Ann Arbor for two performances (Thursday and Friday, January 21 and 22) courtesy of UMS, members of the six person cast breathe and walk slowly, in unison, down the Power Center’s two main aisleways, completely naked.

The moment has the feeling of an ancient ritual, but it also gives the audience a quiet moment to adjust to seeing unabashed nudity, in the form of aging, imperfect bodies that we don’t usually see beyond the bounds of our own mirror.

It’s shocking, and makes you realize that while we may think, in our hyper-sexualized culture, that we see the human body all the time, we’re actually only invited to gaze at one particular type of body: young and thin. To see a much broader range of bodies dancing, leaping, interacting with audience members is a strange kind of revelation.

More like a short story collection in dance form – the hour-long show has almost no dialogue – “Untitled” is the kind of edgy, experimental performance art show that won’t be for everyone. But if you got the chance to go, there was plenty to unpack and think about.

And similar to the way your ear adjusts to Shakespeare’s language after a few moments, you stop being so aware of the actors’ nakedness after the show’s opening sequence. Though laid bare, the actors’ bodies aren’t sexualized, except in moments when they choose to make them so – thus lending them power and agency.

Indeed, Amelia Zirin-Brown, also known as Lady Rizo, performs a kind of dirty pantomime show, picking out specific targets in the crowd for her come-ons while standing near the edge of the stage; but then she concludes by singing a delicate, gorgeous Welsh tune, lest we pigeonhole her.

Similarly, Becca Blackwell performs a solo sketch in which she morphs from a winking, bright-eyed performer to a boxer to a drunk, until finally, at the scene’s conclusion, she covers her nakedness – the only such moment of self-consciousness depicted in the show.

There’s a pantomimed fairy tale-type story, set to classical music, in which a witch (Zirin-Brown) tries to keep her damaged, feral companion fed by luring people into traps; after some dainty choreography, pink parasols go from being coy to being deadly; there’s a woman (Jen Rosenblit) who rocks out hard to heavy metal, only to end up in a slow-motion fistfight (with Desiree Burch); and the show’s two trained dancers, Katy Pyle and Madison Krekel, perform a gorgeous duet.

Of course, the thing that usually impresses us most about dancers is their absolute control over their body’s movements. When naked, non-dancer-like bodies execute choreography, you can’t help but ponder the contrast between those tightly controlled movements and the things we have no control of in regard to our bodies: genetics and aging.

Though the show ends with a whimper rather than a bang, it’s true end is the curtain call, when the performers step back on stage fully dressed, and you immediately intuit various things about their personality on the basis of their clothing choices. This felt satisfying, in that the actors’ constant, unapologetic nakedness in the show makes them blank slates – more a reason for our discomfort than the nakedness itself, I’d argue.

And while the show is one that’s easier to admire than love – there’s lots to chew on, but I struggled to put the pieces together – it’s at least sure to get your thoughts racing.