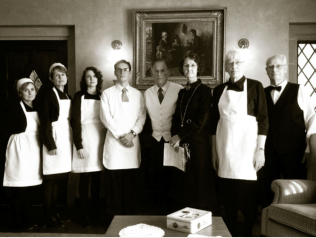 If you’ve been missing Lady Mary and the Dowager Countess—or, more pointedly, Carson, Mrs. Hughes, and the rest of the “downstairs crowd”— ever since Downton Abbey aired its last episode earlier this year, keep a stiff upper lip: Meadow Brook Hall will be hosting a series of events throughout February, calling the program Downton Days.

This is the popular program’s third year, and Rochester’s opulent Meadow Brook Hall—the historic former home of Matilda Dodge Wilson, widow of automotive pioneer John Dodge, and her second husband Alfred Wilson—seems as close to a British countryside castle as one can find in Michigan. Built in the 1920s, the Hall stood at the center of a 1,500-acre estate that also contained farm buildings, residences, and formal gardens.

“The idea (for Downton Days) came to us a few years ago, when someone made a comparison, saying Meadow Brook was Michigan’s own Downton Abbey,” said Shannon O’Berski, Meadow Brooks’ director of marketing and community relations. “It just seemed like a great opportunity to host events and bring people to Meadow Brook to learn about the house and the staff that had lived and worked here.” READ THE REST HERE 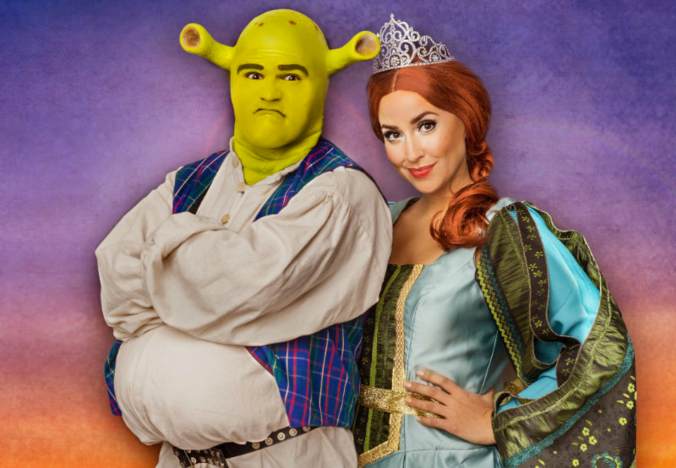 “Sometimes an actor goes, ‘I’m on call for heart surgery. I may have to leave because of that,’” said Matt Kunkel, who’s at the helm of BPP’s upcoming production of Shrek. “And it’s like, they all put in more work [in rehearsal] because they don’t know when they might have to go, so rather than giving 100 percent, they put in 125 or 200 percent. And when they’re not there, they’ll meet with someone the next day to learn everything they missed. It’s a very professional group. They’re incredibly hard workers.”

These performers aren’t professional actors, of course. They’re Burns Park students, parents, teachers, staff, and neighbors who come together, working both on stage and behind the scenes, to put on a big musical each winter. Money raised by the production goes to support arts programs in the Ann Arbor Public Schools.

“I love the idea of … adults and kids coming together to do a show, which is one of the reasons why we’re doing Shrek,” said Kunkel, who’s currently studying directing in U-M’s department of theater and drama. “We take the whole thing, and we set it in a library … so we have the adults telling the story of Shrek to elementary school kids, and the world of Shrek just comes to life.” READ THE REST HERE

In recent years, technology has fed our impulses so successfully that we’ve grown accustomed to getting instant answers to questions, and watching or listening to or reading anything we want, whenever we want it. Fewer and fewer mundane desires ever go unfulfilled. But are we happier now? And is something lost when we never experience anticipation, and very little outstrips our reach?

These are some of the many, many questions raised in Brian Letscher’s new comic drama, Smart Love, now having its world premiere at the Purple Rose Theatre. The play begins in the wee, still-dark hours of the morning, when a cozy, post-coital scene between a recent widow, Sandy (Sarab Kamoo), and her widower boyfriend, Victor (Jim Porterfield) is abruptly halted by the unexpected arrival of Sandy’s son, Benji (David Bendena). Mother and son have been out of contact for a while, following the sudden collapse, seven months earlier, of the family patriarch, Ron (Wayne David Parker): a dreamy inventor who never saw his years of hard work come to fruition.

And while all signs indicate that Sandy is moving forward with her life, Benji – an MIT doctoral student who works in an artificial intelligence lab and witnessed his beloved father’s death – is a future-embracing young scientist who can’t stop looking back. He makes the ultimate dramatic gesture on the eve of what would have been his parents’ 25th anniversary, but he does so without knowing all the facts about their marriage. END_OF_DOCUMENT_TOKEN_TO_BE_REPLACED

This year’s Detroit Concert for a Cure – happening on Monday, Jan. 16 at 7 p.m. at Ferndale’s The Loving Touch – could also be called “Phantom, After Hours.”

Why? Because individual cast members from the touring production of “Phantom of the Opera” (playing at the Detroit Opera House Jan. 11-22) will be performing non-Phantom songs, cabaret-style, on what would otherwise be their day off.

Proceeds from the Detroit Concert for a Cure show benefit Broadway Cares/Equity Fights AIDS and Ferndale Schools’ orchestras; local drag queen Sabin will emcee (and a surprise guest performer or two may also show up); there will be a silent auction and a cash bar; and Nashville-based Mackinac will perform during the afterglow.

“I saw him perform once before, and he’s great,” said show organizer Brad Harder of Mackinac (also known as Steven Mullan). “He’s a singer/songwriter from Michigan who relocated to Nashville, and he’s always working on neat projects. … It’s nice, because after the benefit show, cast members will get a chance to mingle with people in the audience during the after-party.”

Though not an annual event, the Detroit Concert for a Cure has previously featured performers from touring companies of shows like “In the Heights” and “Shrek: The Musical.” Harder estimates this to be the sixth iteration of the benefit, and it sprang, in part, from his experience as a company manager for touring productions, as well as his work as part of the Broadway and off-Broadway communities. READ THE REST HERE

This month, on WEMU-FM 89.1’s Art & Soul segment focused on the performing arts, All Things Considered host Lisa Barry and I talked with Purple Rose Theatre artistic director Guy Sanville and playwright and “Scandal” star Brian Letscher – formerly a U-M football player and EMU assistant coach – about the new play “Smart Love,” which is having its world premiere at the Rose.

The Ann Arbor area doesn’t hibernate in the winter. Visit for yourself and check out these amazing events and more this February. READ THE REST HERE 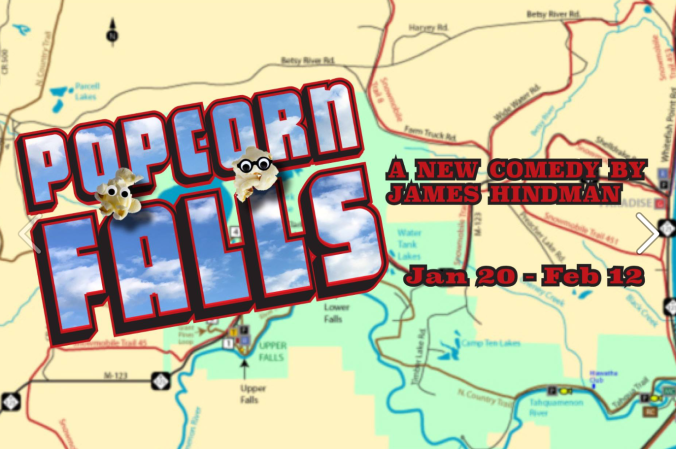 When an economically depressed town is at its breaking point, and residents are scrambling for solutions, you wouldn’t expect the fiscal-strategy-of-choice to involve opening a theater. But in the quirky, offbeat world of James Hindman’s Popcorn Falls, now being staged at Theatre Nova, that’s the scenario. In order to access funds earmarked for the arts, the Kernels – which is what Popcorn Falls’ residents call themselves – must come together and put on a show.

Formerly a tourist destination, the beleaguered town has come on hard times since a dam diverted the (former) falls’ water elsewhere. A new mayor, Mr. Trundle (Jeff Priskorn), works with his colleague and friend, Joe (Jonathan Jones), to create a play from scratch, cast it, and present it, all within a few days’ time.

Priskorn and Jones not only play the characters mentioned above, but also several eccentric townspeople, plus a cigar-chomping power broker from a neighboring town who’s calling the shots. Because Mayor Trundle is the play’s central character, Priskorn only occasionally ventures into other personas, while Jones must be a kind of turbo-chameleon, quickly shifting gears in nearly every scene by changing his voice and posture (and sometimes his cap), to the point of playing both sides of a single conversation.

Though both actors serve Hindman’s material well – well-guided by director Daniel C. Walker – Jones’ is the more wow-worthy performance, simply by virtue of the focused finesse necessary to juggle his many roles. READ THE REST HERE 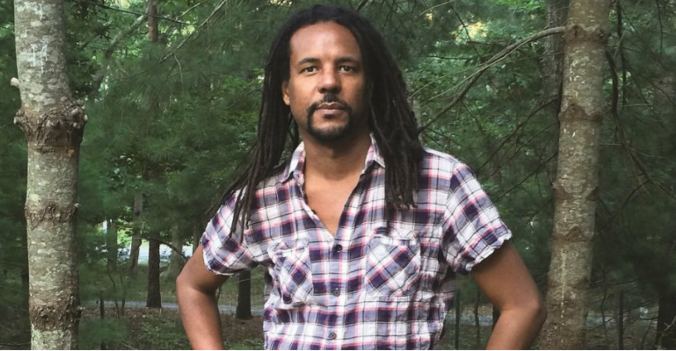 Bestselling author Colson Whitehead spoke in Ann Arbor on January 12 as part of U-M’s bicentennial celebration theme semester, but it wasn’t his first visit to Treetown. Apparently, in 2001, Whitehead gave a reading at Borders to “about five people,” on a night when the Red Wings were playing for the Stanley Cup.

“It seemed like a good excuse,” said Whitehead with a shrug –- this time, to a near-capacity crowd packed into Lydia Mendelssohn Theatre.

Whitehead now has many more published books and years of experience under his belt, of course. But his mainstream profile spiked most dramatically in the last few months, when the publication date of his newest novel, The Underground Railroad, got bumped up a month (from September to August) due to it being named an Oprah’s Book Club selection — and nothing makes an author’s career explode quite like receiving Oprah’s imprimatur.

That’s far from Railroad’s only distinction, though. The novel also won the National Book Award for fiction and was named one of the best books of the year by The New York Times, The Washington Post, GQ, Newsday, and more.

Railroad tells the story of Cora, a teenage plantation slave in Georgia who flees to the North, seeking her mother. Her means of travel is literally a subterranean train — rather than the series of routes and “safe houses” that composed the real underground railroad — and as the locomotive makes stops in different states, Cora is exposed to each region’s strange, sometimes surreal responses to slavery. READ THE REST HERE 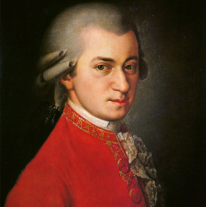 If the Ann Arbor Symphony Orchestra’s annual Mozart Birthday Bash concert was a person, he could legally, for the first time, buy an alcoholic beverage this year to celebrate.

“It seems like Mozart is almost everybody’s favorite composer,” Lipsky said, “so we just decided to celebrate him every year.”

Wolfgang Amadeus Mozart was born in Salzburg, Austria on January 27, 1756 — that’s 261 years ago, but who’s counting? — and because he wrote more than 600 works in his too-short life (he died in 1791 at age 35), A2SO’s annual showcase never has to worry about repeating itself. READ THE REST HERE

Bestselling author Colm Toibin’s November 2016 reading/talk in Ann Arbor — part of the U-M’s fantastic Zell Visiting Writers Series — drew a big enough crowd to not only fill all the 185 seats in UMMA’s Helmut Stern Auditorium, but also the wall end of both side aisles and the back wall.

Toibin, best known for his novel Brooklyn, the basis for an Oscar-nominated film, was one part of ZVWS’s star-studded lineup for fall 2016, which also included Everything I Never Told You author (and U-M MFA program grad) Celeste Ng and Tony Award-winning playwright/actress and Michigan native Lisa Kron (Fun Home).

“That was a large turnout for one of our readings, but not unprecedented,” said Douglas Trevor, director of U-M’s Helen Zell Writers’ Program, in reference to Toibin’s event.

With big and/or rising literary stars on the roster, and increasing community awareness of the series, Trevor and HZWP assistant director Maya West (who oversees the reading series) should probably expect more full houses in future.

“Our list to date is pretty incredible,” said Trevor. “We really hope and strive to provide more opportunities for literary engagement in Southeast Michigan.” READ THE REST HERE