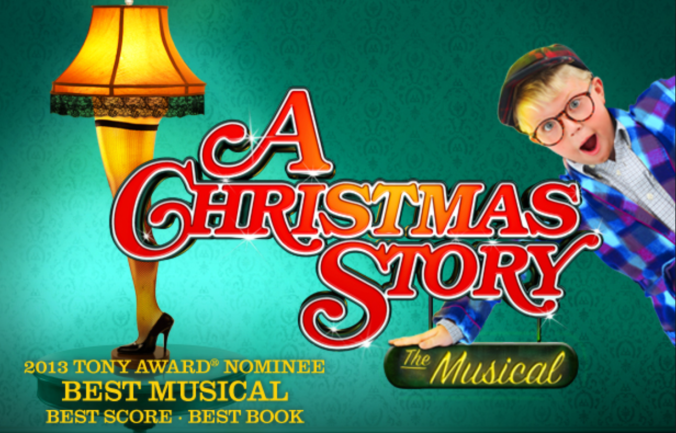 DETROIT, Mich. – One reason for the enduring success of the 1983 movie A Christmas Story – recently adapted for the stage as a musical with a Tony-nominated book by Joseph Robinette and Tony-nominated music and lyrics by U-M grad songwriting team Benj Pasek and Justin Paul – is the way it frankly acknowledges how a child’s powerlessness often butts up against his earnest dreams.

For what can a 9-year-old boy do when he desperately wants a Red Ryder BB gun for Christmas, but his only path to getting one involves convincing the adults in his life, or Santa, that he should get one? Sure, he can try to make his case; but when everyone reflexively dismisses his desire, saying, “You’ll shoot your eye out,” the boy turns to the only means left to him: manipulation. And when that doesn’t work, an eruption of frustrated, childish, physical anger seems inevitable.

Set in a small Indiana town in 1940, in the snowy weeks leading up to Christmas, A Christmas Story was originally inspired by the writings of storyteller and radio personality Jean Shepherd. Though Ralphie (Austin Molinaro) anchors the narrative, A Christmas Story is, more broadly, a comedic tale of family dynamics, as well as an exploration of the world kids inhabit when adults aren’t around. There are bullies, needy little brothers, misinformation, and “triple-dog dares” to contend with daily. Meanwhile, at home, Ralphie’s blustery “Old Man” (Christopher Swan) and dutiful mother (Susannah Jones) square off over an “award” that Ralphie’s father has won in a contest: a lamp that looks like a woman’s leg, sheathed in a fishnet stocking that Ralphie’s dad insists on placing at the house’s front window. READ THE REST HERE

We know our alumni work in every profession, but only recently did we learn just how many graduates are making a name for themselves in the fashion industry—thanks to some truly innovative business models.

On this page, we highlight a few success stories and showcase some of their products. To add just another fun U-M layer, we invited staff from the Alumni Association (and some of their extremely well-behaved children) to model the clothing and accessories. We then captured them on campus at some of our favorite spots. (Guess where if you can!) READ THE REST HERE

Pontiac’s Strand Theatre — which will  reopen its doors next month as the Flagstar Strand Theatre for the Performing Arts, following a $20-million renovation — has assumed many identities since its construction in 1921.

It started out as a 1,200-seat vaudeville theater, but with the arrival of  talking pictures, it became one of eight cinemas in downtown Pontiac. From 1963 to 1966, the theater was called the Forum and specialized in art-house fare, and from 1967 through 1981, it was known as the Campus Theater and showed adult films until it was shut down by a police raid.

In 1986, the City of Pontiac bought the shuttered building, which underwent $2 million in renovations. Its only subsequent use came when when Detroit’s Attic Theatre company relocated to the former Strand between 1992 and 1994. READ THE REST HERE

Nationally known film critic Owen Gleiberman appeared in his hometown — specifically, the University of Michigan’s Harlan Hatcher Graduate Library Gallery — on the evening of December 7 to talk about his book, Movie Freak: My Life Watching Movies.

Perhaps not surprisingly, Ann Arbor plays a key supporting role in Gleiberman’s story. Gleiberman moved to Treetown with his family when he was about five, and he grew up during the ’60s and ’70s — which happened to be the heyday for U-M’s campus film societies. Gleiberman wrote about film while a student at Pioneer High, and he continued to do so for The Michigan Daily as a college student.

“I don’t know if i would have ever wanted to become a film critic, or a film buff, or everything this book is about if it hadn’t been for Ann Arbor, and the way this place kind of nurtured me,” Gleiberman said before reading a passage from his book on Wednesday night.

But in addition to chronicling his descent into movie madness, Movie Freak also, Gleiberman noted, turned out to be a kind of valentine to analog culture. READ THE REST HERE

Nearly 10 years after the 2006 closure of the Improv Inferno club on Ann Arbor’s Main Street, Shelly Smith says a recent push to bring improv comedy back to Ann Arbor at least partly “came down to gas money.”

After Improv Inferno’s rent reportedly doubled, forcing the club’s closure, Smith regularly drove from her Ann Arbor home to Ferndale’s Go! Comedy and Hamtramck’s Planet Ant Theatre to hone her craft. As recently as two years ago, those venues were among the only regional options left for improv students and performers, especially after Second City Detroit (originally located in downtown Detroit before making the move to Novi in 2005) also closed its doors for good in 2009.

So Smith had a personal stake in helping to resurrect the improv scene in Washtenaw County when she first approached the Ann Arbor Civic Theatre (A2CT) about forming improv troupes in 2013. The company wasn’t ready to take on a new project at that time, though, so Smith pounded the pavement around Ypsilanti and Ann Arbor, seeking potential homes for a new, homegrown troupe. She held auditions and put together a small group, which put on a few shows but ultimately disbanded for lack of a permanent home.

“I approached several venues that were dark on most nights, and I just kept thinking, ‘So you don’t want to make any money and liven this place up? You’d rather have it just sit here empty on most nights?'” Smith says. “Some places told me they’d let me use the space for $200 an hour. But we didn’t need any special lighting or sound. We just needed a certain amount of square footage and some chairs.” READ THE REST HERE 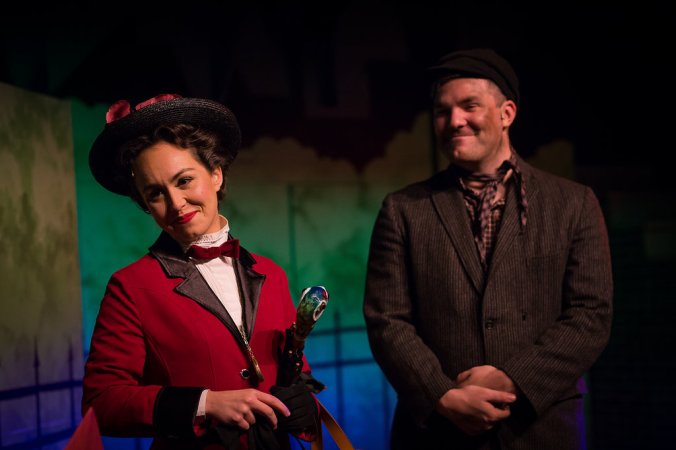 Wait – did you feel that?

Wind’s in the east, mist coming in, like something is brewing, ‘bout to begin …

In case you don’t recognize these lyrics, they’re sung in anticipation of the arrival of the magical English nanny Mary Poppins, who recently came in for a landing at Dexter’s Encore Theatre.

The stage musical adaptation of “Mary Poppins” – with a book by “Downton Abbey” scribe Julian Fellowes, and new songs by George Stiles and Anthony Drew, alongside many of Richard M. and Robert B. Sherman’s memorable songs from the 1964 Disney film version – draws from both P.L. Travers’ original book series and the Oscar-nominated movie.

In Edwardian London, young Jane (Olivia Goosman) and Michael Banks (Emmanuel Morgan) are working through a series nannies, thanks to their pranks and a penchant for running off. Their emotionally distant father, banker George Banks (Daniel A. Helmer), convinces himself that his wife Winifred (Ally Kaufman) is simply not hiring nannies who are sturdy and strict enough for the job; but before he can even place an advertisement, Mary Poppins (Olivia Hernandez) mysteriously appears, insinuating herself into the family’s life before anyone can figure out what’s happening.

The children have magical adventures with Mary and her chimney sweep friend, Bert (Sebastian Gerstner); but when George is suspended from his job, his past comes to haunt not only him but his children as well, forcing George to re-assess his priorities and choices. END_OF_DOCUMENT_TOKEN_TO_BE_REPLACED

Michael Lopetrone and Annie Keris in JET’s “Handle with Care.”

A Christmas romantic comedy about two Jews? Though this might sound like an improv comedy prompt, it also aptly describes Jason Odell Williams’ play Handle with Care, now being staged by Jewish Ensemble Theatre.

Set in a dingy motel room in Goodview, Virginia on Christmas Eve, the drama begins with an aggravated Israeli woman, Ayelet (Annie Keris), dressing down a baffled package delivery man, Terrence (Dan Johnson). The two have no way to communicate with each other, yet have a desperate need to, so Terrence calls on his childhood friend, Josh (Michael Lopetrone), for help, assuming that Josh “speaks Jewish.”

Josh arrives and explains to Terrence that he only took a crash course in Hebrew leading up to his bar mitzvah; but as Ayelet continues speaking, he picks up on the word “grandmother” (Henrietta Hermelin Weinberg), and this sets a fateful series of events – and many stilted conversations – in motion. READ THE REST HERE