Everything’s coming up live music in downtown Farmington these days.

Yes, throughout the summer, you can head to Farmington’s Sundquist Pavilion for Lunch Beats on Wednesday at noon; Family Fun in Riley Park on select Wednesday evenings at 7 p.m.; and Rhythms in Riley Park nearly every Friday, from 7-9 p.m.

Tom Birchler, who emcees and runs both Lunch Beats (now in its second year) and Rhythms, went from performing in Riley Park – with his band, Paisley Fogg – to taking Rhythms’ reins in 2014.

“The first year I did it, … Riley Park, at that time, was under construction,” said Birchler. “The compass in the middle, the paver paths, the steps leading down into the park – they were in the midst of doing all that construction that summer, so my first year, we were down on Grand River, in the gazebo across from the high-rise senior living space.”

Back then, Birchler only emceed, and bands would bring their own sound system – so the series only sounded as good as each artist’s equipment. 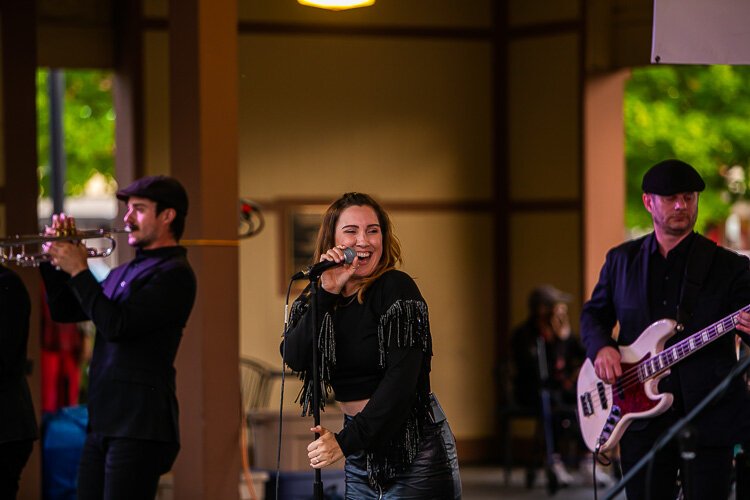 But Birchler wanted the series to have consistently good production quality, so when it was time to draw up a proposal for the following year, Birchler offered to supply and oversee the sound equipment at each Rhythmz show (which is where you’ll usually spot him every Friday night).

“I just put on another one of my hats,” said Birchler. “My roadie hat, my sound mixer hat. It was nice because I was able to get a better quality of sound every week. … And it was easier for the bands to just show up with their guitars and amps and stuff. It allows them to work cheaper, too. So it’s worked well, and the budget for the talent goes further than it otherwise might.” READ THE REST HERE

The first in an occasional series on brunch spots in the metro region. We begin in downtown Farmington.

Weekends are for sleeping in (provided you don’t have young children or pets providing unwanted wake-up calls).

They’re for taking the time to recover, awake, arise, and start the day.

So it’s little wonder that brunch has become such a popular dining trend in recent years. As busy as everyone is, a civilized meal with a reasonably late morning start time sounds about as irresistible as a bubbly, refreshing mimosa.

Where can you meet up with friends or family members for brunch (or just late breakfast) in downtown Farmington? This week, Metromode highlights four spots that offer some delicious options for those lazy weekend mornings. READ THE REST HERE

To understand why and how a big, multi-day annual bluegrass festival took root in the small town of Milan in the 1980s, just think of the factory-job-fueled migration trail previously forged between Appalachia and the Detroit Metro area.

“In the late ‘60s and early ‘70s, people moved to this area from Kentucky, from Virginia, from Tennessee, from West Virginia, … and [bluegrass] was the music they loved,” said Mark Gaynier, who hosts and organizes the Milan Bluegrass Festival. “The Kigers [who launched the first iteration of the festival] came from Alabama originally. … Lots of people around here had been born and raised on this type of music, so the Bluegrass Festival just felt like a big old family reunion.”

Ruth Kiger planned the inaugural Milan Bluegrass Festival as a charitable fundraiser (to help a friend who was suffering from an illness) in 1980, but the response was so overwhelming that she and husband Cayce Kiger, who’d built the KC Campground, decided to put on the festival annually.

The festival quickly grew in prominence – to such a degree that bluegrass god Bill Monroe appeared at the last one planned by the Kigers in 1986.

“Then Ruth Kiger passed away from cancer,” said Gaynier. “And the festival bounced around a little bit. It was in Leslie, Michigan for a while.”

Back then, Gaynier was a salesman for Frito-Lay, and the Kigers’ campground was one of his accounts. “I got to be friends with them,” said Gaynier. “I used to joke and say things like, ‘I should have a job like yours, where you sit out there in a lawn chair, and people just throw money at you and go put up a tent.’ And then in 1996, they came to me and said, ‘Why don’t you buy the campground?’”

Gaynier did just that. READ THE REST HERE

Swing dancing’s trendy mainstream revival in the 1990s – which spawned everything from a classic “Jump, Jive an’ Wail” Gap commercial to Jon Favreau’s cult-hit indie romantic comedy, “Swingers” – came to a pretty abrupt close with that decade.

But you’d never guess that if you came to downtown Farmington on a summer Thursday night.

In Riley Park’s Sundquist Pavilion, about 200 people of all ages (though the average skews young) gather weekly to Lindy Hop, Jitterbug, and Charleston their cares away by way of Swing Farmington.

“I fell in love with it from the first night,” says Melvindale’s Amber Konjarevich, 25, who first attended with friends in 2013. “Over the years I’ve made some of my best friends at Swing Farmington, who have been there for me and will be lifelong friends. I love being able to bring new people and have them experience the joy that [Swing Farmington] brings to me. The energy is always so positive, and it’s a great way to bring people together.” READ THE REST HERE

This was a fun program I took part in – thanks again to the fabulous Patti Smith – wherein I shared with the crowd my desire for a twist on a classic tale: which is to say, “Curious George Gets What’s Coming to Him.”

In the Ann Arbor Observer, Megan Inbody noted, “Journalist Jenn McKee read a Curious George story, expressing exasperation at the utter lack of negative consequences for the pernicious primate.” Indeed! You can read more about the event here.