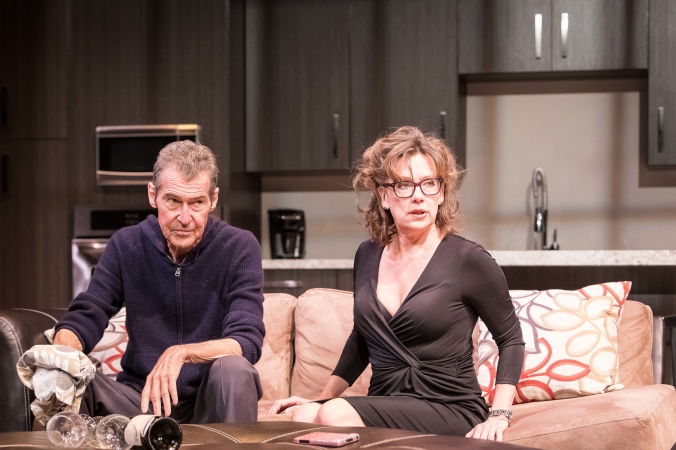 Retirement can, in some ways, feel like a second adolescence. You’ve got time to pursue your passions and focus on yourself; you can experiment and make some adventurous choices; and if you’re single, you can take home someone you just met and let hormones take the wheel.

The latter happens in Carey Crim’s “Morning After Grace,” now having its world premiere at the Purple Rose Theatre.

For after attending a funeral the previous day, retired lawyer Angus (Randolph Mantooth, of John Gage/”Emergency” fame) wakes up in his Florida condo with Abigail (Michelle Mountain), who’s wearing nothing but a comforter on his couch. When Abigail goes looking for her missing clothing, she stumbles upon a woman’s dry cleaning in a closet, causing her to believe that Angus has a wife.

But before she can get a cab to come out to the Amelia Island retirement community, a neighbor and former professional baseball player, Oliver (Lynch Travis), drops in to introduce himself to Angus and offer condolences. But an incorrect assumption – one of many – leads the three to spend a strange, sometimes funny, sometimes painful few hours in each other’s company. END_OF_DOCUMENT_TOKEN_TO_BE_REPLACED 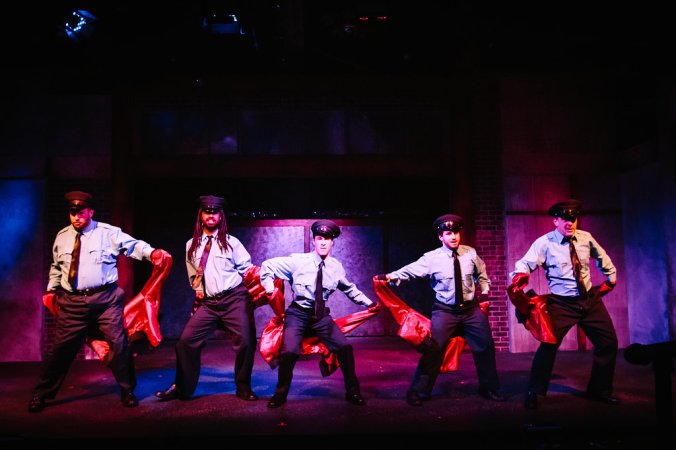 The cast of The Encore Theater’s “The Full Monty” showed everyone a good time. (Photo by Michele Anliker)

For a recent date night, I took my husband Joe out to see men strip down to their birthday suits.

No, we didn’t trek to Windsor for the evening. Instead, we’d traveled to Dexter, where the Encore Theatre was staging its closing night performance of “The Full Monty.” For Joe had been a huge fan of the original, Oscar-nominated 1997 British film comedy of the same name, so I thought he’d enjoy seeing Terrence McNally (book) and David Yazbeck’s (music and lyrics) stage musical adaptation, which earned 9 Tony Award nominations in 2001.

Though McNally and Yazbeck transplanted “Monty” from Sheffield, England to Buffalo, New York, the story’s basic premise remains intact. In a blue collar town that’s fallen on tough economic times, a group of depressed, unemployed steel workers watch as their wives and girlfriends flock to a Chippendales-style men’s revue at a club. One of the men, Jerry (Eric Parker) – who’s divorced, unable to make child support payments, but desperate to stay connected to his young son Nathan (Alejandro Cantu) – hatches the idea of a locally produced male strip show featuring “real men.”

Gradually, Jerry persuades other despairing men in town to be part of the show; but when he learns that ticket sales are slumping, he ups the ante by promising that unlike Chippendales dancers, his troupe – which calls itself Hot Metal – will get completely naked on stage. END_OF_DOCUMENT_TOKEN_TO_BE_REPLACED 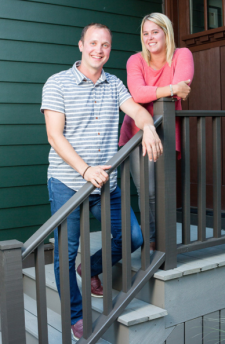 In the fall of 2015, the Ann Arbor-based building company Maven Development got a call from “potential clients” about renovating a house located at 730 Spring St. At first, it didn’t seem like an unusual request for the company, which is led by three former U-M athletes. But then they learned a little more.

“They gave a brief description of what they wanted to do, and it sounded kind of unorthodox,” says Chelsea Kroll, ’05, Maven’s project coordinator and a former U-M gymnastics team captain. “We thought, ‘What’s going on here?’”

Maven’s principal/founder Dan Williams, ’00, and chief project manager Jeff Backus, ’00, met with the men who’d made the phone call. They learned that the house would be the focus of the HGTV show “Urban Oasis”—which renovates and gives away a home via a sweepstakes that began Oct. 4—and that Maven was being tapped to oversee the project.

Now, after approximately six months of extensive renovations, the house is starring in its own TV show, with air dates on Oct. 7, Oct. 17, and Oct. 26. In the weeks leading up to the program, the house as well as Ann Arbor and U-M alumni have been featured on the program’s website. READ THE REST HERE

Margaret Atwood spoke to a sold out crowd at Rackham Auditorium on Oct. 21, 2016. (Photo by Barb Chaffer Authier)

The full-capacity crowd at Rackham Auditorium on Friday night not only got to hear witty insights from one of our era’s greatest, most accomplished writers, Margaret Atwood (decked out in black and orange for Halloween); they also got to hear the septuagenarian Canadian novelist/poet rap.

Hag-Seed is one of a group of books that have been published as part of the Hogarth Shakespeare project, wherein Shakespeare plays are retold by acclaimed contemporary novelists. Literati Bookstore sponsored Atwood’s Ann Arbor appearance. READ THE REST HERE 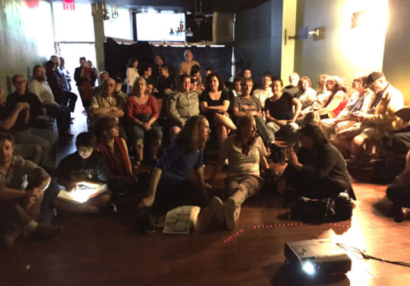 Though the University of Michigan’s Penny Stamps Distinguished Speaker series—which spotlights cutting edge contemporary artists of all stripes, from across the globe, on Thursdays at Ann Arbor’s Michigan Theater—has grown in popularity and esteem for more than a decade, it’s still tough to put together a lineup each fall and winter semester.

“These are people who don’t make their living by speaking,” said series director Chrisstina Hamilton. “They make their living by doing work, and they’re really successful at it. So speaking is not the first thing on the agenda they want to do. It doesn’t move their work forward. … And on top of that, these are people who are really busy. … It often takes six years from an initial contact before we can finally get it on their agenda, in terms of importance, and before they work it into their schedule.” READ THE REST HERE 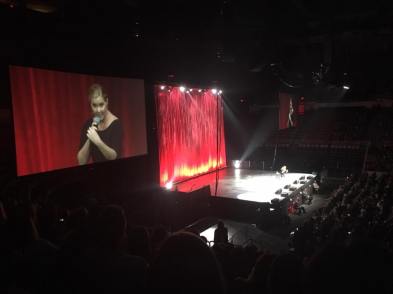 [Editor’s note: I published this essay on my personal blog, but because it touches on a recent local comedy performance, I thought I’d cross-post it here as well.]

Let me start by saying I’m a big fan. (I originally wrote “huge,” but that word feels like it’s been co-opted by a certain Presidential candidate lately.)

I love the unapologetic feminism that runs through your work; I admire the candor with which you revealed tough things about yourself and your life in your book, “The Girl with the Lower Back Tattoo” (which I pre-ordered and read immediately); and there’s no small number of sketches from your Comedy Central show that I’ve watched and howled at repeatedly (“Football Town Nights,” “12 Angry Men Inside Amy Schumer,” “Lunch at O’Nutters,” “Last F**kable Day,” “Girl, You Don’t Need Makeup,” and “Compliments” – which actually helped alter my own reflexive, self-deprecating behavior).

So when your stand-up comedy tour stop in Detroit was announced several months ago, I got so antsy about getting tickets that I checked out on a big group of lady-friends who were figuring out what they could and were willing to pay in terms of ticket levels, how many would go, etc., in order to cash in on the pre-sale. I did not want to miss this show, and I wanted a good seat.

I loved hearing about the public response to your nearly-nude photo shoot, and your Ritz cracker binge blackout, and the food poisoning that you and your boyfriend experienced during a romantic trip to Paris. But you quickly got frustrated with the crowd when you ventured into commentary about gun control and felt us shutting down. You mentioned outright that we were offering more resistance to that portion of your act than any audience had previously – and that for that reason, you were going to keep pushing and go even further down that road, as the best comedians do when sensing discomfort in their audience. READ THE REST HERE 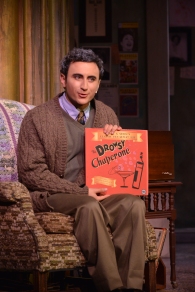 If you, like “The Drowsy Chaperone”‘s narrator (billed as Man in Chair), are suffering from “non-specific sadness” – or even if you’re not, frankly – the U-M musical theater department’s production of “Chaperone” achieves precisely what he argues musicals are supposed to do: “It takes you to another world – for a little while, at least. It helps you escape from the dreary horrors of the real world.”

And during this particularly ugly election season – well, let’s just say “The Drowsy Chaperone” provides a charmingly joyous evening’s respite for us all.

A show that both affectionately mocks and celebrates musical theater, the Tony Award-winning “Chaperone” – with music and lyrics by Lisa Lambert and Greg Morrison, and book by Bob Martin and Don McKellar – evolved from its initial incarnation as a stag party musical comedy sketch, which a group of friends hatched to celebrate the nuptials of Canadian actors Martin and Janet Van de Graaff. END_OF_DOCUMENT_TOKEN_TO_BE_REPLACED

Writer/journalist Kevin Smokler grew up watching ‘80s teen movies in Ann Arbor, and he’ll be doing that again in the coming weeks, since the release of his new book, Brat Pack America: Visiting Cult Movies of the ‘80s, inspired the Michigan Theater’s fall film series, “Kids in America: ’80s Teen Classics” which kicks off on Monday, October 10 with a double feature: Ferris Bueller’s Day Off at 7 pm and The Breakfast Club at 9:30. Smokler will be in attendance, as will director John Hughes’ son, James Hughes, and both will offer their insights about the films.

“I knew I wanted to write about the movies I grew up with, but I knew I had to find something else to say about them,” said Smokler, a Greenhills School grad who now lives in San Francisco.

As Smokler started revisiting beloved movies from his youth, he noticed that they were consistently set in places that weren’t Los Angeles or New York City, but rather fictional towns like Shermer, Illinois, or the suburbs of the San Fernando Valley, or the Midwestern city of Chicago. Locations played a key role in these films, so in addition to talking to actors, writers, and directors, Smokler went on ‘80s teen movie pilgrimages to Goonies Day in Astoria, Oregon, aLost Boys Tour in Santa Cruz, California and more. READ THE REST HERE 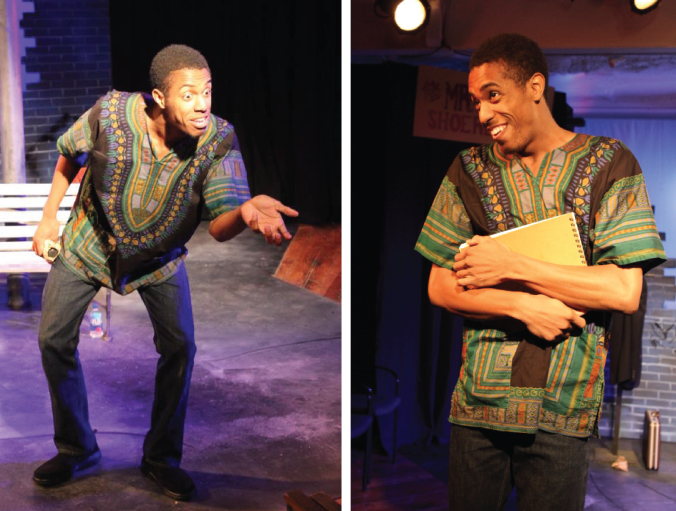 Matthew Webb as the characters in “Mr. Joy”

While watching Daniel Beaty’s play Mr. Joy at Theatre Nova, I immediately thought of Yong Kim, the owner of Mary’s Fabulous Chicken and Fish in Ann Arbor, who was robbed and brutally beaten with a plastic milk crate while walking to his car from the restaurant in 2014. Kim was 74 at the time of his attack, and the assailants turned out to be two teenage boys.

According to press reports, Kim managed to do something many of us would struggle mightily to do: he forgave his attackers.

Mr. Joy tells a similar story, through the prism of one actor playing several characters. In the play, longtime Harlem shoe repair shop owner Mr. Kim is robbed and beaten one night, but he won’t tell the police who his attacker was. And while Mr. Joy is the play’s nucleus, we never actually see him. Instead, we hear perspectives from those whose lives he’s touched: a homeless former painter; an 11 year old girl from the projects with AIDS, Clarissa, who considers herself his apprentice; Clarissa’s feisty grandmother; Clarissa’s schoolyard boyfriend, Peter; a young poet, DeShawn, who finds hope at church; Mr. Joy’s Ivy League-educated, real estate dealer son; the son’s rich, black Republican boss; the boss’ white girlfriend, who yearns for a child; and the boss’ transgender, flight attendant daughter, Ashes. READ THE REST HERE