Usually, when a national chain’s CEO announces that its 650 stores will be shuttered by year’s end, the news doesn’t feel particularly personal.

But then, downtown Farmington’s beloved, high-performing Dressbarn store has – since its late ‘80s launch – come to feel more like a local business than a corporate retailer.

“I remember years ago, my father passed away, and I needed the proper clothes for the funeral before I flew out of town later that day,” wrote Farmington Hills resident Barb McHenry on NextDoor. “I got (to Dressbarn) early and knocked on the door because the store wasn’t open yet. A saleswoman came to the door, and I explained the situation. She let me in and put me in a dressing room. She and the other saleswoman kept bringing me clothes to try on until I had what I needed. I will never forget their kindness that day.”

“It’s definitely a neighborhood store,” says Stephanie Clement, store manager of downtown Farmington’s Dressbarn. “We’re unique because we’ve got this 11,000 square feet corner spot in a strip mall, but it doesn’t feel like a strip mall, because right outside, there’s the farmers market and there are all these other community events happening year-round. I don’t know of any other stores that have this kind of atmosphere. … It’s not like being part of an outlet mall, where there’s this quick turnaround time, and people are only there to shop. Here, people sometimes come in just to say ‘hi,’ because it’s been a while since they’ve come in to see us.” READ THE REST HERE

If the shredders at Riley Skate Park appear shorter than usual lately, it’s because PLUSkateboarding – a downtown Farmington store founded by owner Rob Woelkers in 2003 – runs week-long summer day camps that are so beloved, many kids not only attend year after year but ask to register for multiple weeks in a single season.

“Anytime a kid learns a new trick, and one of their parents comes to pick them up for the day, you’ll hear the kid say, ‘Watch this! Let me show you what I can do now!’” says Randy Smith, who’s worked as a counselor for PLUS’ camp for more than a decade. “I take pride in being part of that. … But on a deeper level, the kids are learning real-life lessons, and they don’t even know it. Lessons like, when you fall down, you get right back up and try again. … For me, that’s the biggest takeaway.” 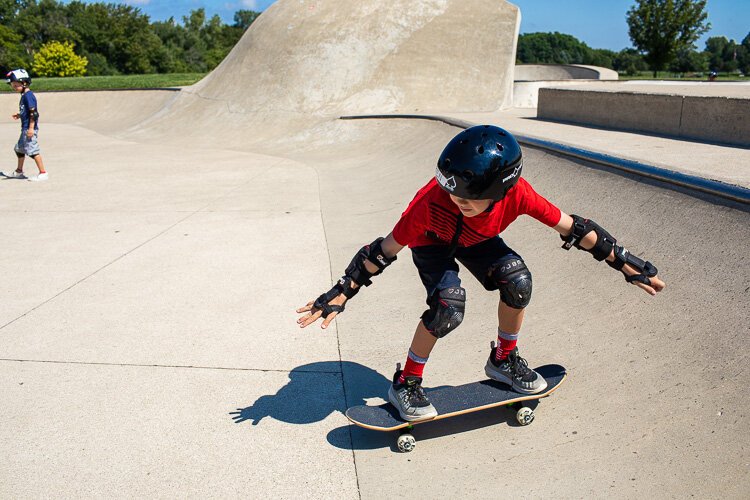 About 35 to 40 kids, ages 5-15 (and of varying skill levels, including lots of beginners), attend each of the six offered weeks of PLUS’ summer camps. Also, though Riley Skate Park opened just 10 years ago, this is PLUS’ 15th season of camps. (An earlier iteration of the camp happened at Heritage Park.)

Woelkers’ history goes even further back, though, having started – at his former boss’ urging – a skateboarding camp while managing a skate park in Brighton in 2000.

“At first, I was against it, because that’s not really what skateboarding is about – (having) a coach or teacher,” says Woelkers. “Once we started doing it, I realized how fun it was, and it really wasn’t any different than just skating with your friends and encouraging them to push themselves.” READ THE REST HERE