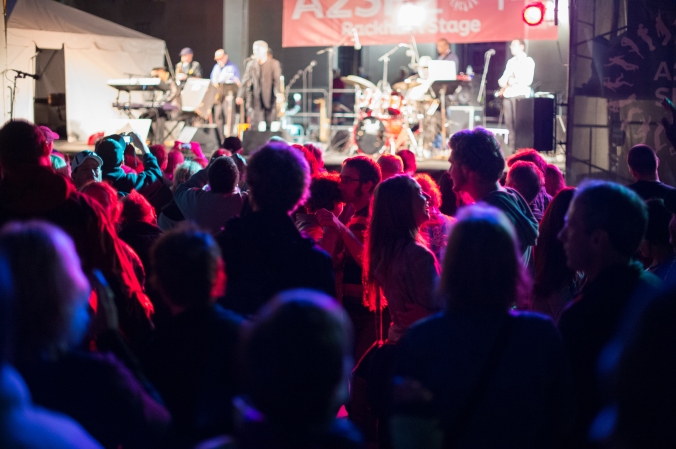 Ann Arbor Summer Festival’s Top of the Park features free outdoor concerts, retreats and activities (alongside several food vendors) and is scheduled to happen between June 10 and July 3, 2016. (Photo by Myra Klarman)

Woo-hoo! The Ann Arbor Summer Festival has just announced its outdoor Top of the Park series music performances for the 2016 season. From folk pop ensembles and a rogue marching bands, to the pioneers of Baltic Brass Band, there is something for everyone at Top of the Park.

The Top of the Park series runs from June 10th through July 3rd, 6 nights each week for nearly 4 weeks, starting at 5 pm. The entire festival features an eclectic mix of over 150 events showcasing the best in music, dance, comedy, film, spoken word, contemporary circus, street arts, and family entertainment with select events through August.

The festival’s Top of the Park musical performances take place on 2 stages on the campus of the University of Michigan:

Additional funding is provided by: the City of Ann Arbor and the President’s Office of University of Michigan, along with the following family program underwriters: Anne and Howard Cooper, Connie and Tom Kinnear, Wendy and Ted Lawrence, Cindy and John Nixon, Erin McKean and Steve Sullivan, Ellie Serras, and THE MOSAIC FOUNDATION (of R. & P. Heydon).

The 2016 festival is also supported in part by grants from: the National Endowment for the Arts: Artworks and the Michigan Council for Arts and Cultural Affairs. Media partners for the season include: ann arbor’s 107one, Ann Arbor Observer, Metro Times, Michigan Radio 91.7 FM, and WEMU 89.1 FM.

A detailed schedule of Top of the Park series musical performances follows.

The Ann Arbor Summer Festival is an exhilarating celebration of performing arts, outdoor entertainment, and community spirit. An international arts gathering in Ann Arbor, Michigan, the three and a half-week festival offers an array of ticketed and free events, both indoors and out, featuring a progressive mix of local, national, and international artists.

Presenting over 150 events each season and attracting a diverse audience of more than 80,000 people, the festival continues to grow and is a leading multi-arts celebration that enriches the cultural, economic, and social vitality of the region.