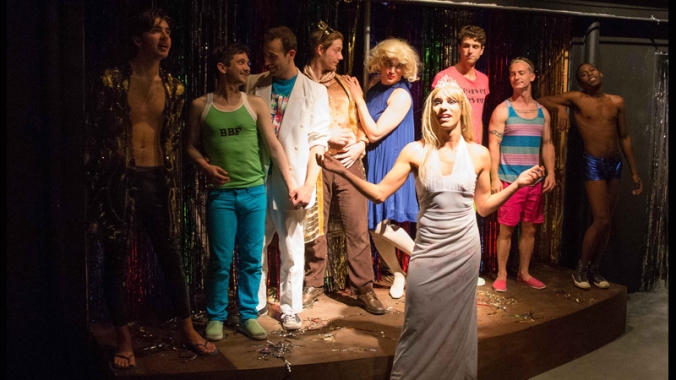 The cast of Slipstream Theatre Initiative’s “A Midsummer Night’s Dream.”

Literature’s most famous sprite, Puck, wearing nothing but metallic blue hot pants? Demetrius and Helena waking to mutual love via Berlin’s “Take My Breath Away”? Rival beaus engaging in a push-up face-off on the dance floor?

This is (probably?) not your father’s A Midsummer Night’s Dream, now playing at Ferndale’s Slipstream Theatre Initiative. Adapted by director Luna Alexander and her cast – I’d wager you’ll never hear “Dost thou even lift, bro?” in any other version of Shakespeare’s comedy – Slipstream’s all-male Midsummer runs a brisk 90 minutes and takes place in Athens, Ohio at a gay nightclub.

If that last detail gives you pause, you’re not alone. Slipstream’s ensemble, in the wake of last weekend’s massacre at an Orlando gay nightclub, struggled to determine how to proceed, if at all, with the production. (Alexander and artistic director Bailey Boudreau had hatched the concept for the show a year ago, aiming to time Midsummer with the celebration of Pride Month.) In the end, though, the company chose to move forward, making small adjustments in hopes of making the show defiantly fun and fierce instead of merely silly. READ THE REST HERE