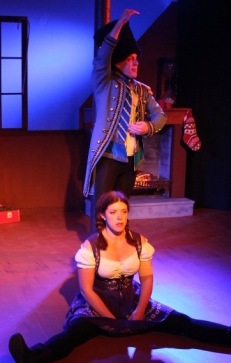 One of my favorite moments in Friday’s preview performance of Theatre Nova’s new Sugar Plum Panto was unscripted.

Actress Sarah Briggs asked the crowd what was on their Christmas lists this year. When a man jokingly answered, “A girlfriend,” Briggs cocked her head, pursed her lips, made a small “go get ’em” gesture, and said in a low, sympathetic voice, “Hang in there, Tiger.”

Pantos, of course, are a longstanding British holiday tradition, but they’ve also recently taken root at Theatre Nova, beginning with last year’s An Almost British Christmas. Pantos take a familiar children’s story and give it several silly twists and updates, integrating physical comedy and childish humor with more sophisticated, cheeky, and timely jokes for adults, thus drawing families all together for a night at the theater. Panto audience members are encouraged to boo and hiss when the villains appear, and candy is thrown to the kids in the crowd a few times, making for a loose, chaotic-but-fun atmosphere. READ THE REST HERE