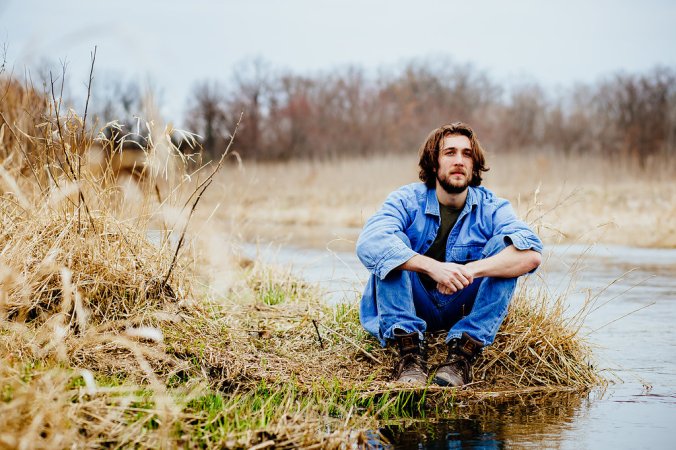 Conor Ryan stars in “Into the Wild” at Dexter’s Encore Theatre. (Photo by Michele Anliker Photography)

Being confronted with Christopher McCandless’ true tragic tale – now being told via “Into the Wild” at Dexter’s Encore Theatre – during young adulthood is a very different experience from watching it unfold as a parent. As a teen or twentysomething, you think, “He’s so gutsy and true to himself!” while the older you thinks, “Dear God, why did he plot this doomed course for himself?!”

It’s like generational “Rashomon.” You’re seeing the same story, but your subjective filter skews how you perceive this cult figure.

Based on Jon Krakauer’s bestselling book, “Into the Wild” (as well as a collection of McCandless’ own writings, postcards, and photos called “Back to the Wild”), the in-development stage musical – with music and lyrics by Niko Tsakalakos, and book and lyrics by Janet Allard – focuses fairly tightly on McCandless’ post-college years. Upon graduating from Emory, McCandless (Conor Ryan) donated the remaining $25,000 that had been set aside for his education to charity and started hitchhiking around the country, working odd jobs while having no contact with his frustrated-but-loving parents (Sarah Briggs and Greg Bailey).

McCandless lived this free-spirit life for two years before deciding to go to Alaska, a landscape he viewed as largely uncorrupted by mankind and civilization. Aiming to live off the land, McCandless hiked off into the Alaskan wilderness, woefully unprepared for all that Mother Nature might throw at him, and he soon made camp in an old, abandoned bus.

The show’s creators (along with director Mia Walker) are seeing the show on its feet for the first time at Encore, after years of work, and there’s a good deal to be excited about. Tsakalakos’ music is, on the whole, terrific, with achingly beautiful melodies and harmonies – delivered by Encore’s vocally top-notch ensemble, and guided by music director Tyler Driskill – that made me want to run out buy a cast recording that doesn’t even exist yet.

And it’s hard to imagine a better actor to cast as McCandless than Ryan. Whether he’s sublimely blissed out, belting the song “Alaska” upon his arrival in his snowy fantasyland, or falling apart at the realization that he may have eaten something poisonous (“Seeds”), Ryan powerfully commands the stage with a deceptive ease, somehow managing to be both larger than life and utterly familiar.

Golden-throated Gayle E. Martin is similarly outstanding as Chris’ “road mom,” Jan, a woman whose heartbreaking, years-long estrangement from her own son subtly forces Chris to confront what his choices will mean for his parents, particularly his mom. Briggs and Bailey add their terrific voices to the show’s vocal mix while also grounding, and making sympathetic, McCandless’ parents – to such a degree that you wonder what else, beyond typical young adult rebellion, is happening in Chris’ head. And Dan Helmer oozes goodhearted warmth as Wayne, a South Dakota man who’s grown accustomed to hiring runaways and misfits to work at his grain elevator.

Overall, the ensemble functions as a highly polished unit, working in tandem with the show’s ambitious design team. Stephanie Busing wisely extends the stage’s snowy backdrop out onto the side walls, to submerge the audience more completely within the vast landscape; a staircase behind one large mound of snow on stage allows for climbing, as well as greater variation in the actors’ movements throughout the show; and Busing’s projections, on one layer of the backdrop, help indicate the various places we travel with Chris while following his story. Occasionally, using static projections would help the audience focus on key dialogue more – for instance, when young Chris (Connor Casey) starts pushing back at his parents regarding school work – but generally, the projections fulfill their crucial storytelling role well.

The first act of this production moves at a good clip and generally provides the expositional glimpses we need into McCandless past and present life. Yes, some transitions are bumpy, but these are minor hiccups in an otherwise smooth opening act that nearly wins on its irresistible score alone.

The second act, though, is where the audience can start to feel lost in a blizzard. Things begin with a bang, via Ryan’s invigorating rendition of “Alaska,” followed by “Satellites,” a tender number that unpacks a bit more of Chris’ troubled relationship with his dad. Yet while the nature of this father-son disconnect feels like a crucially important puzzle piece – for it appears to be a primary driver of Chris’ doomed, foolhardy mission – it still remains a bit murky by show’s end. Yes, there’s passing mention of his father being married to his first wife still when Chris was born, and that another child was born to Walt’s first wife following Chris’ birth, but it’s passed over so quickly that it fails to land or have sufficient impact.

More broadly, the show’s creators have a far tougher chapter of McCandless’ story to dramatize in the show’s second act – depicting one isolated young man’s collision course with starvation and death – so it’s not surprising that that’s where the bulk of the work still needs to be done. To solve the inherent problem of depicting McCandless alone on stage (and thus making Ryan sing song after song) for an entire act, friends he’s met on the road, as well as his parents and his younger self, appear as they enter his thoughts.

But the pacing gets stilted nonetheless – the show runs two hours and forty-five minutes – and things take a confusing turn when a photographer stumbles upon Chris’ bus, followed by a ranger who wanders onto the stage and calls in a decomposing body on the bus, and then we learn that the photographer was lost in the same stretch of wilderness years before (we suddenly see him shoot himself), and then Chris sings a number with his younger self (perhaps the score’s sole less-than-fabulous song/number, “The Climb”) as the show arrives at its end/epilogue. So after the show has turned inward on Chris for much of the second act, things suddenly shift to the external; and because what’s real and what’s not is deliberately cloudy, the audience spends more time figuring out the storytelling than staying engrossed in the tale itself.

So Allard and Tsakalakos will likely, as they take feedback from this first full production of “Wild,” have to kill a few of their darlings in the second act, painful though that may be. Martin’s performance of “Forgiveness” offered a gorgeous moment of reflection, as did Alexandra Reynolds’ “Happiness” (which also came close to answering questions I had about McCandless’ opportunities for romantic love and/or sex during his vagabond days). “Teklanika” – wherein McCandless tries to return from the trail but finds the snowmelt has made the river impassable – is second act’s fiercest moment of clarity and no return, so that must stay.

Yes, tough decisions lie ahead for the show’s creators. Prudent trimming, and an eagle-eyed re-thinking of the final scenes/numbers, will likely give “Into the Wild” a decent shot at making it to Broadway, which I’d love to see. For while I may feel conflicted about McCandless’ enduring legacy as a cult hero, I’m absolutely clear about my desire to see this show make it.

And it’s only partly because I really, really want this cast recording thing to happen.

“Into the Wild” plays through May 7 at Dexter’s Encore Theatre, 3126 Broad St. For showtime and ticket information, visit http://www.theencoretheatre.org/.