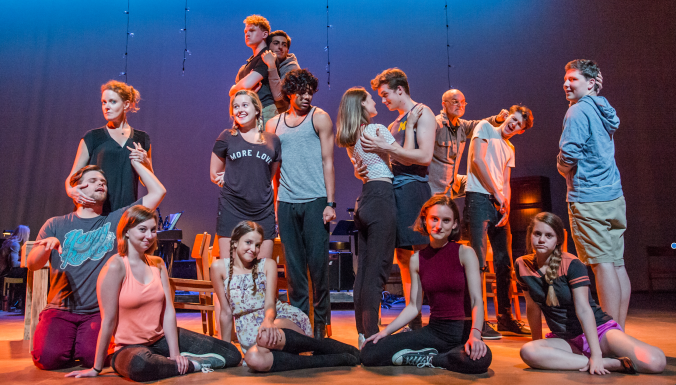 The cast of A2iC’s production of “Spring Awakening.” (Photo by Myra Klarman)

“Art saves lives” is a phrase that gets thrown around a lot, but lately, because of controversial shows like Netflix’s “13 Reasons Why,” people have begun wondering about art’s potential for harm. In May, a 23-year-old Peruvian man killed himself, leaving behind a series of tapes for the people in his life, just as the central character in “13 Reasons” did.

So when Ann Arbor in Concert — a town-and-gown theatrical company that presents one staged concert of a musical each year — chose “Spring Awakening” as its selection for 2017, it didn’t make the decision lightly.

The  Tony-winning 2006 musical is about teens in 19th-Century Germany who are confronted by the suicide of a peer, among other intense coming-of-age issues. The production team  realized that it might prove unsettling in Washtenaw County, which had 12 suicides last year  by people  15-24 (compared with two in 2015). In addition, there have been two teen suicides in recent months. Still, A2iC decided that moving forward with “Spring Awakening” could lead to a broader conversation about the issues the show explores. READ THE REST HERE