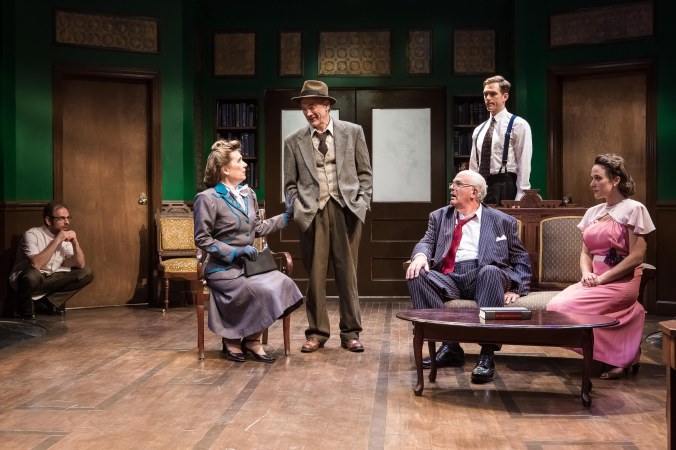 When we’re stressed, we turn to comfort food – which may be one reason why Chelsea’s Purple Rose Theatre had a hit on its hands via Mary Chase’s 1944 comedy classic, “Harvey.”

Yes, people who sought a small break from anxiety about nuclear annihilation, white supremacy, and impending natural disasters were likely more than happy to be temporarily transported to a time when a man with a huge, imaginary bunny friend was of great concern.

The play – which won the Pulitzer Prize for drama, and is largely known these days through a 1950 film adaptation starring Jimmy Stewart – begins as Veta Simmons (Michelle Mountain) is throwing a high society coming-out party for her daughter, Myrtle Mae (Caitlin Cavannaugh), while Veta’s eccentric brother Elwood Dowd (Richard McWilliams) is supposed to be out playing cards. When Elwood arrives home unexpectedly and starts introducing Harvey, his invisible, six foot three inch tall rabbit friend, to party guests, Veta finally decides she needs to have Elwood committed. But when Elwood keeps charming everyone he meets, and the question of Harvey’s existence becomes murkier, Veta must decide what version of her brother she wants to have in her life.

When approaching “Harvey,” director Guy Sanville clearly took cues from Elwood’s Irish surname, as well as Chase’s own Irish background and upbringing. Cavannaugh and (most noticeably) Mountain delivered their lines with a pronounced brogue; Cavannaugh’s Irish dancing skills were integrated into one set change; and the young actress performed “I’ll Tell My Ma” and (with David Bendena) “The Parting Glass” between scenes.

This heavy emphasis on the family’s Irish ethnicity seemed an attempt to expand on and deepen the tribe’s sense of its own history, but it occasionally drew too much attention to itself (the dance, while well-executed, seemed over-long), and distracting questions arose from inconsistency (while Veta speaks with an accent, her brother Elwood does not).

Even so, Sanville found a truly terrific Elwood in McWilliams. Depicting Dowd as an easygoing, guile-less, kindhearted charmer, McWilliams conveyed a innate gentleness that not only won over the other characters, but the audience, too. Mountain, meanwhile, skillfully threaded the needle of playing a woman painfully caught between her love for her daughter and her brother, while also delivering on some of the play’s best comic bits. But one tonal misstep involved David Bendena’s over-the-top take on sanitarium attendant Wilson, who ended up resembling (and sounding like) a frenzied version of Reverend Jim Ignatowski from “Taxi.” Yes, Bendena earned some laughs with his pronounced antics, and they clearly communicated the idea that the sanitarium staff may in fact be more off-kilter than the patients; but I ultimately didn’t believe in this person, who seemed a caricature within the show’s broader, more realistic context. Plus, when Wilson experiences an instant (mutual) attraction to Myrtle Mae, not only does Myrtle’s romantic interest seem bizarre – what exactly would draw her to this character? – but the scene also comes off as an incongruously cynical moment in an otherwise sweet, earnest show.

Suzanne Pearline concocted a gorgeous, green-with-dark-wood set for the show, featuring a structural backdrop that, with a couple of adjustments, shifted from Dowd’s inherited family home to Chumley’s Rest Sanitarium. Suzanne Young outfitted the cast in era-, class-, and age-appropriate clothes (Cavannaugh’s blushing pink frock emphasizes her youth in a sea of grays and browns); and Noele Stollmack’s textured, shadowy lighting design underscored the hazy line between what’s real and what’s not.

“Harvey” has aged surprisingly well, retaining a timeless charm while extolling the values of unconditional love in families, and the capacity for belief. Yes, by having invisible Harvey open and shut doors before the play’s final moment, the Rose’s production undercut what had previously been the story’s big “twist” – usually, when the door opens and closes by itself at the show’s conclusion, it’s the first and only time that the audience discovers that Harvey may be more than just a figment of Elwood’s imagination – but Sanville may have wished, by this staging choice, to put us more firmly in Veta’s shoes. For in a moment of vulnerability, Veta confesses to a young psychiatrist (Rusty Mewha) that she believes that she’s occasionally seen Harvey herself.

We had too, of course. So maybe Sanville intended to ask us, in our politically volatile, social media age, whether we have the courage to believe what’s happening right before our eyes, or whether we’ll clamp shut our eyelids and insist on trusting what we thought we knew.

Or maybe the director simply thought that playing with our own sense of belief would make the show more fun. I can’t say for sure, of course; but either way, “Harvey” provided an inviting, two and a half hour escape hatch from our terrifying times.

(Two things of note: “Harvey” closed at the Purple Rose on August 26th – the performance I saw happened on August 24 – and the Rose’s next show is “God of Carnage.” Look for a review of that to happen much earlier in the run! Second, in the future, when I self-publish a review of an ongoing show that’s exclusive to A2ArtsAddict, I will include an optional “pay” button, for those who wish to support my efforts to keep local theater criticism alive. Thanks for reading/visiting!)