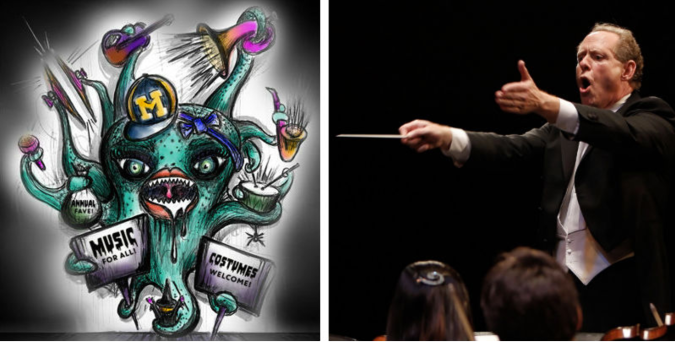 Sunday’s 40th annual Halloween concert at Hill Auditorium — which combines the Campus Symphony Orchestra with the Campus Philharmonia Orchestra — will mark conductor Kenneth Kiesler’s 23rd time on the podium while in costume. (What he’ll be dressed in this year is under wraps.)

But what you might not know is that he and the student musicians get one chance each year to raid the theater department’s costumes.

“They have a huge warehouse,” said Kiesler. “You could get just about anything you want.”

One legendary U-M Halloween concert costume, apparently, involved conductor Richard Rosenberg who, in the late ’80s, dressed as a bat and directed a selection from Strauss’ Die Fledermaus while — you guessed it — suspended upside down.

Believe it or not, some in Sunday’s audience may be able to provide a first-hand account. READ THE REST HERE