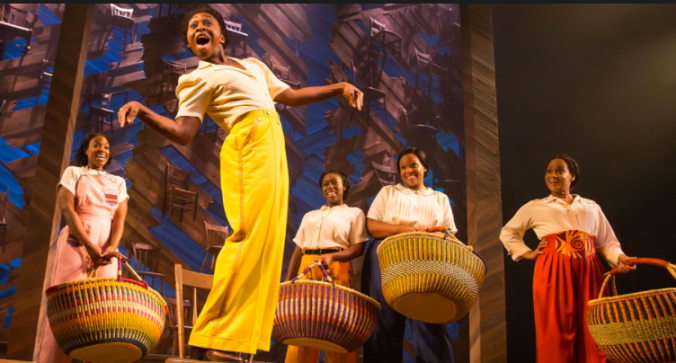 The fantastic touring production of John Doyle’s “The Color Purple” recently came to Detroit’s Fisher Theater for a limited engagement.

If you’re part of a historically oppressed demographic – or even if you’re just a person who tries to focus on people’s potential for kindness and empathy – this year has been brutal. Between white supremacists openly marching in Charlottesville and planning to come to Michigan, to Hollywood’s seemingly endless supply of real-life sexual assault and harassment stories, and horrifying mass shootings, it’s been harder than ever to find reason to hope.

Which may be why the touring production of The Color Purple, now in Detroit for a limited engagement at the Fisher Theater, feels so electric, and so emotionally satisfying in this moment.

Based on Alice Walker’s Pulitzer Prize-winning 1982 novel, and set in rural Georgia in the early twentieth century, The Color Purple tells the story of Celie (Adrianna Hicks), a poor young black woman who’s repeatedly told she’s ugly – especially when compared to her studious, pretty, beloved sister Nettie (N’Jameh Camara) – and who’s been twice impregnated by the man she believes is her father (J.D. Webster). The man gives both of Celie’s babies away, then brokers a deal with a gruff, mean, widowed farmer named Mister (Gavin Gregory) to marry her off.

The story spans 40 years in Celie’s life, and the show’s wonderfully rich music (by Brenda Russell, Allee Willis, and Stephen Bray, with a book by Marsha Norman) nods to popular genres of the early twentieth century, including boogie woogie, ragtime, blues, and gospel. READ THE REST HERE