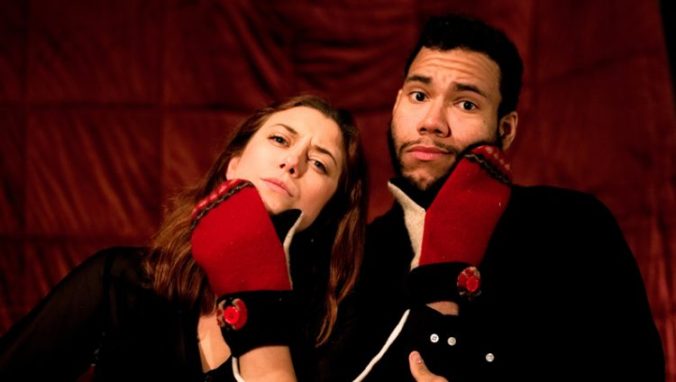 Luna Alexander and Dan Johnson in “Tales from the Mitten” at Slipstream Theatre Initiative. (Photo by Jennifer A.J. Jolliffe)

I was intrigued when I first heard that “Tales from the Mitten,” a world premiere two-hander now on stage at Ferndale’s Slipstream Theatre Initiative, told stories of what it’s like to be a working artist in Michigan’s theater scene.

Why? Because it’s one thing to see lots of locally produced shows (as I do); it’s another thing entirely to hear about all the behind-the-scenes stuff that happens on the way to opening night – especially now, when local theaters are struggling like never before (thanks to the gutting of local arts sections in media) to reach potential audience members.

And while “Mitten” might sound, at first blush, like an “Inside Baseball” type of affair – with my fellow critics and I serving as occasional umpires, I guess? – the show gradually shifts into telling the broader story of the challenges of being a dedicated, passionate artist in an environment that doesn’t really seem to value the work you do (Jenn wrote in a theater review she’d later post on her blog and share with her handful of Patreon supporters – ahem).

“Mitten,” performed and created by Luna Alexander and Dan Johnson, begins with what feels like a warm-up. The actors, bundled up for the Michigan winter, chat with each other and the crowd, projecting a heightened, peppy, winking tone. But when an amplified voice from on high suggests they do the scene again “with more energy” – well, you sympathize with the quick, subtle flash of an expression on Alexander’s face that reads, “Seriously?”

From there, “Tales from the Mitten” unfolds as a series of audition calls – which Alexander and Johnson keep meeting up at – for the state’s handful of Shakespeare-centric theater companies. Each segment begins with Alexander arriving late because of traffic, running into the already-waiting Johnson, and having the same short, commiserating exchange about how, even if they landed roles, the pay wouldn’t even cover their gas expenses.

Why this opening was repeated so often verbatim – instead of showing us two actors who simply keep running into each other at the same audition, and have different conversations at each – became a narrative mystery I could never quite solve. While Alexander and Johnson may have intended to underscore the idea that actors who know each other only superficially walk around having the same exact conversation with each other in these settings, the effect didn’t necessarily translate well within the context of the show, becoming a bit of a pacing albatross.

That said, there are some fun critiques of tape ball’s bizarrely esteemed role in Michigan’s theater scene, as well as the double-edged sword that is the Actors’ Equity Association. Plus, Pure Michigan parodies that act as connective tissue between scenes – though hit-and-miss in terms of comedic quality – were an inspired idea.

But “Mitten” finds its footing most affectingly when it stops trying so hard and gets personal. Alexander candidly shares her own painful #metoo tales of sexual harassment in auditions, while Johnson presents a searing critique of the ways in which, as a man of color, he’s often cast (or not) – in more ways than one – before he even opens his mouth. And both actors offer soul-bearing perspectives on what drew them to acting, and what continues to drive them, even as the world around them repeatedly conveys its indifference.

With only a handful of audience members filling the seats at Monday evening’s “Mitten” performance, these heartfelt confessions felt all the more poignant and moving.

Director Bailey Boudreau gives the show enough shape so that there’s a clear structure, but also enough looseness so that the actors can – as Alexander did on Monday – improvise and “go rogue.” For instead of telling the story of her first experience seeing a theater production at age six, which she’d done at previous performances, Alexander shifted gears and instead narrated a never-told-before story of an awkward young girl she’d once taught at a theater camp who seemed to find herself and her tribe there, even in this theater-no-man’s-land state.

These moments are the “Mitten” moments that will stay with me – and something we can all relate to, whether we’re working, struggling “creatives” or not.