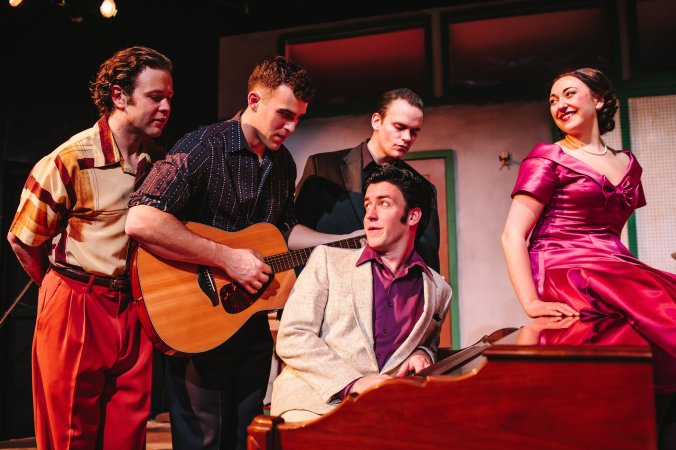 After seeing the opening night performance of Million Dollar Quartet at Dexter’s Encore Musical Theatre , I’m thinking an equally apt name for the show would be “Nostalgia Dance Party.”

And I don’t say that dismissively. No one loves a good dance party more than I do, believe me. But there’s also no getting around the fact that the small bit of narrative that’s embedded among performances of monster hits like “Hound Dog” and “Great Balls of Fire” – Colin Escott and Floyd Mutrux wrote the show’s book – feels like a pale afterthought.

Inspired by a historic meeting-of-the-greats that happened on December 4, 1956, when “Blue Suede Shoes” scribe Carl Perkins (Alex Canty) was scheduled to have a recording session at Memphis-based Sun Studios – backed by up-and-coming piano madman Jerry Lee Lewis (Marek Sapieyevski) – Million Dollar Quartet invites you to imagine sitting in the recording studio that day, when not only Johnny Cash (Stephen Shore) stopped by, but also the future King himself, Elvis Presley (Josh White), with his then-girlfriend (Kaitlyn Weickel) in tow. READ THE REST HERE