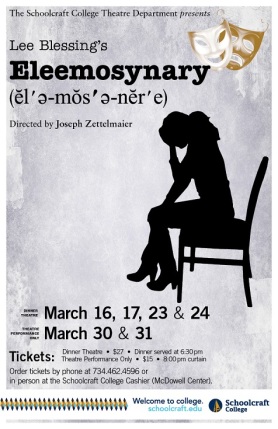 Let me start this review with a confession: I’m a person who ugly cries upon hearing Olive, the sweet-but-overlooked young heroine of “The 25th Annual Putnam County Spelling Bee,” sing “My Friend, the Dictionary.” Why? Because I, too, was once a girl who seldom had a playmate, even at school, so I regularly turned to books – including the family’s dog-eared, red paperback dictionary – for company. Words never pointedly picked you last for their team, or refused to let you sit next to them on the bus. They were always there, a seemingly endless supply of them, and they offered escape and refuge to kids like me.

Which brings us to Echo, one of three characters in Lee Blessing’s 1985 drama “Eleemosynary,” now on stage at Livonia’s Schoolcraft College. In Blessing’s play, precocious, isolated young Echo (Kate Hoin) hungrily studies words, too, enthralled by both their music and their meanings; she also aims, however, to win the national spelling bee, believing that this will somehow bring together Artie (Julia Garlotte), the damaged mother who abandoned her, and Dorothea (Linda Rabin Hammell), the eccentric, doting grandmother who raised her.

To tell this story, Blessing jumps around in time, providing impressionistic snapshots of life within this highly dysfunctional matrilineal line. And while Blessing’s intentions appear to be admirably feminist in scope – all three females are extraordinarily smart, independent (particularly from men, who are notably absent), and forge unconventional paths for themselves – the self-consciously quirky quirks with which Blessing saddles the characters ultimately undercut their ability to make the leap from author-constructed devices to human beings.

Artie (short for Artemis) is so profoundly damaged by Dorothea’s eccentric brand of mothering that when her baby, Echo (originally named plain old “Barbara” by Artie), appears to show a passing preference for Dorothea, Artie takes a job abroad and leaves her young daughter in Dorothea’s care.

I have so, so many issues with this. And on a far more basic level, I just didn’t buy it.

Because the Dorothea mothering moments we’re shown never seem all that dire. Yes, she pressures young Artie to take risks, and to do things she’s uncomfortable doing (i.e., trying to fly by way of a home-made contraption), and to push herself intellectually, but Dorothea’s neither abusive nor cruel. So when Artie confesses to the audience, “I have trouble touching my daughter,” it either rings false or feels unearned, based on the scenes we’re shown. Plus, Echo’s youthful zeal for words doesn’t feel all that genuine, either.

Unlike “Putnam County”’s Olive – who revels not just in words, but also in the ritual of finding them in one huge, awe-inspiring, alphabetically ordered book – Echo reflexively, showily spouts off spellings and meanings, which seems less like an act of someone in love with language than of someone desperate for attention and love. Which may well be true for Echo, of course. But because the play’s title builds out from this particular part of Echo’s character, this discrepancy ultimately feels a little bait-and-switch-y. 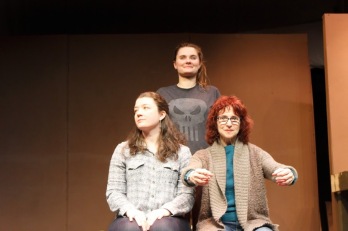 On the up-side, however, a male playwright in the ‘80s unironically grappled with women’s complex, interpersonal relationships, and tried to imagine what life, in the absence of men, might feel like for them. Yes, Blessing’s stab at examining mother-daughter relationships falls well short, in my opinion, but I’m nonetheless oddly heartened by the attempt. Plus, Schoolcraft’s current, 75 minute production, directed by Joseph Zettelmaier, is like the flying-machine attempt Dorothea insists on filming with young Artie: a hopeful try at making a flawed thing work.

Hoin, in one sense, has the toughest acting assignment, in that she must convey a character with the emotional capacity and unworldly perspective of a child, but the intellectual reach of someone far older. Echo can be, in some “Eleemosynary” productions, an irritating character, but Hoin’s barely-submerged-beneath-bravado longing for her mother’s love makes it easier for us to forgive her flashes of eyeroll-inducing arrogance.

Garlotte has a challenging role, too, given how many blanks Blessing leaves unfilled regarding Artie. She is the character who flees, and can’t bring herself to stay, but keeps a thin thread of contact with Echo by way of phone calls. The excuse is that she’s helping Echo study her spelling bee words, and indeed, Artie bristles when Echo tries to expand their interaction. But Garlotte’s sense of woundedness is palpable, even if the exact source of Artie’s injury remains cloudy.

Hammel, finally, wholly embraces her opportunity to play an aging woman who’s long thwarted expectations – since initially disappointing her family by being born a girl – and she raises both her daughter and granddaughter to prioritize their own curiosity and desire. The paradox this raises, of course, is that when you have children, you can’t possibly continue down that exact path. Sacrifice and compromise is necessarily required. So as we watch Dorothea strive to live out her ideals, exuding a hippie-ish vibe (made visible via Emily Betz’s costume design) along the way, we root for her pluckiness and hope, even as we know her ambition is likely doomed.

Zettelmaier thus has a good cast with which to mine Blessing’s script, and Paul Beer’s spare, unfussy set offers, on one side, a raised perch for both the women’s attempts at flying and Dorothea’s post-death vantage point. This latter use, in fact, offers the production’s last best shot at lasting emotional impact. As Dorothea mutely oversees her daughter and granddaughter struggling to have a real conversation about what happens next, you can’t help but feel them tethered together, despite their various attempts to pull away.

“Eleemosynary” continues at Schoolcraft College (with a dinner theater option) through March 31. For information, visit https://schoolcraft.edu/college-events/2018/03/17/college-events/eleemosynary-dinner-theatre-performance-march-17.

This independent review was funded by my Patreon page, which allows readers who value local professional theater criticism to pledge a monthly amount – anything from $1 to $30 – to support my efforts. If you appreciated this review, and would like to see more content like this, please consider pledging via the link above. Thanks!