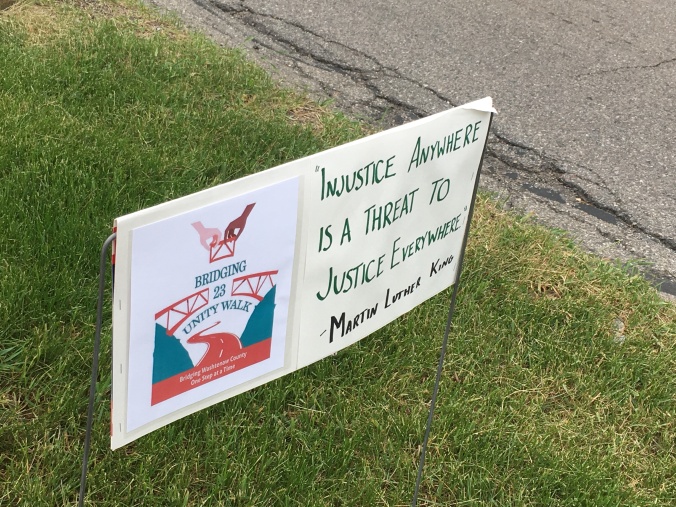 Passing cars honked their horns Saturday morning as organizer Robin Stephens addressed a crowd gathered for the Bridging 23 Unity March from Ann Arbor’s Larcom City Hall to the Ypsilanti Freighthouse. But it was unclear whether the drivers were responding to the crowd of about 40 marchers, or a group of AT&T picketers who were circling across the street.

Stephens pumped her fist and cheered, but then quickly turned back to the Bridging 23 crowd and added, “I think they’re really honking for the strikers, but we’ll take it.

Stephens is an Ann Arbor-based criminal defense attorney and chair of the Washtenaw County Democractic Party Black Caucus, which sponsored the eight-mile walk from Ann Arbor to Ypsi. Stephens hatched the idea for the over eight-mile walk after the Dispute Resolution Center and the Association for Youth Empowerment organized the first Bridging 23 forum in April 2017. That event invited Ann Arbor and Ypsi residents, including Stephens, to come together and talk openly about what many feel is a significant divide between the two neighboring communities.

“Others’ experiences were so different from mine that I was like, ‘Wow, do we live in the same place?'” Stephens said in a post-walk interview. “Then at the end, they challenged everybody to think within themselves about something you could do to help bridge the community. In my 30-plus years of living here, there is a clear distinction between those living on the west side of the county and those living on the east.” READ THE REST HERE