These days, when you walk or drive through downtown Farmington in the evening, you’ll often see crowds gathered outdoors to enjoy a meal or drinks together.

You’ll hear conversation and laughter (and occasionally live music); smell the just-prepared food on the tables, and see dog-walking locals stop to hug someone they know.

But downtown Farmington hasn’t always had this inviting, energetic vibe – and it’s no accident that it’s developed over the course of the past decade or so.

“We’ve been talking about this for at least fifteen years – from the time I got involved with the Planning Commission,” says Farmington Mayor (and architect) Steven Schneemann. “ … At that time, there was a real need for a downtown center. There was no big gathering place downtown. … This led to the development [in 2005] of that big area where Sundquist Pavilion and Riley Park is. But there was no street life, either. There was nothing to draw people out.” 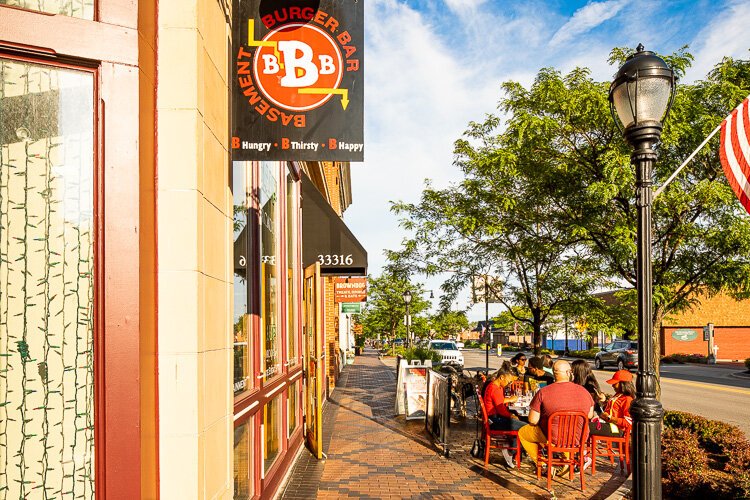 Back then, John Cowley & Sons’ Irish pub and restaurant was one of the only places you could dine outdoors while in the heart of downtown; and before Farmington’s $3.2 million Grand River Avenue streetscape improvement project – which expanded sidewalks, added crosswalks, benches, bike racks, and landscaping – began in 2009, there was little room for growth.

“The whole thing comes down to how you design it,” says Schneemann. “Before the streetscape project, we just had two big sidewalks of concrete separated by three and a half lanes of traffic,” says Schneemann. “Even if there had been more places where you could sit outside, why would you want to? Now, with the fencing and the landscaping – yes, you’re still just 5 or 6 feet away from the cars going by, but there’s a row of shrubs, and trees, and curbs, so there’s more of a sense of security. It feels more comfortable, like a place where you can really sit and relax.” READ THE REST HERE