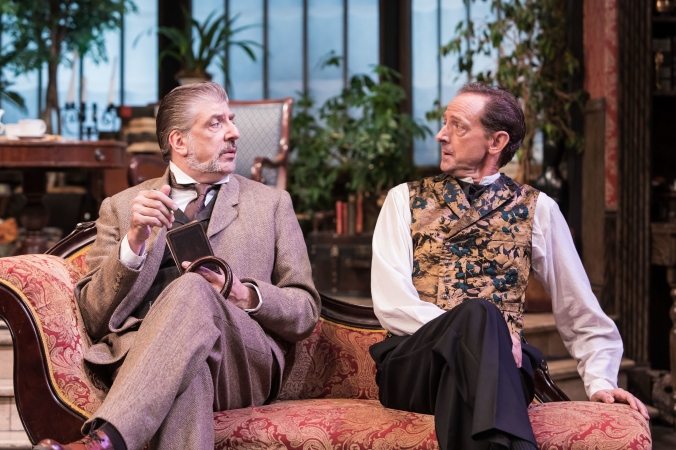 Paul Stroili and Mark Colson in the Purple Rose Theatre’s “Sherlock Holmes and the Adventure of the Fallen Soufflé.” (Photo by Sean Carter Photography)

Local Baker Street Irregulars who enjoyed David MacGregor’s 2018 world premiere production of Sherlock Holmes and the Adventure of the Elusive Ear at Chelsea’s Purple Rose Theatre may now revisit the world’s most famous detective in his London flat for yet another all-new case.

MacGregor’s world premiere follow-up, Sherlock Holmes and the Adventure of the Fallen Soufflé, directed by Michelle Mountain, opened this past weekend at the Purple Rose. Fans of Ear will not only recognize the same actors playing the show’s primary roles — nice bit of continuity, that — but also Bartley H. Bauer’s sumptuous, award-winning set, which has been gloriously resurrected.

Just as Ear wove together cases involving Victorian-era celebrities Vincent Van Gogh and Oscar Wilde — I believe I likened it to a lofty, arts-centric Love Boat episode — Soufflé does the same, this time bringing both world-renowned chef Auguste Escoffier (Tom Whalen) and Prince of Wales Albert Edward (David Bendena) to 221B Baker Street.

The reasons for the men’s visit are anything but clear at first. Escoffier barges into the apartment, rambling about scandal and imminent ruin before collapsing unconscious on Holmes’ floor. The piggish Prince — routinely mocked by the infantilizing nickname Bertie assigned by his disapproving mother — arrives dressed in full, pompous military regalia and a simple black mask (an absurd attempt to hide his identity). He soon explains that he’s been targeted for assassination by anarchists, but you might well wonder: What’s that got to do with Escoffier’s troubles? And why does the surviving, brilliant daughter of Holmes’ criminal nemesis Moriarty — namely, Marie Chartier (Caitlin Cavannaugh) — sneak into the flat for a secret, one-on-one conversation with Dr. Watson (Paul Stroili)?

Answering these questions would, well, suck all the air from MacGregor’s Soufflé, so I’ll simply leave them there. READ THE REST HERE