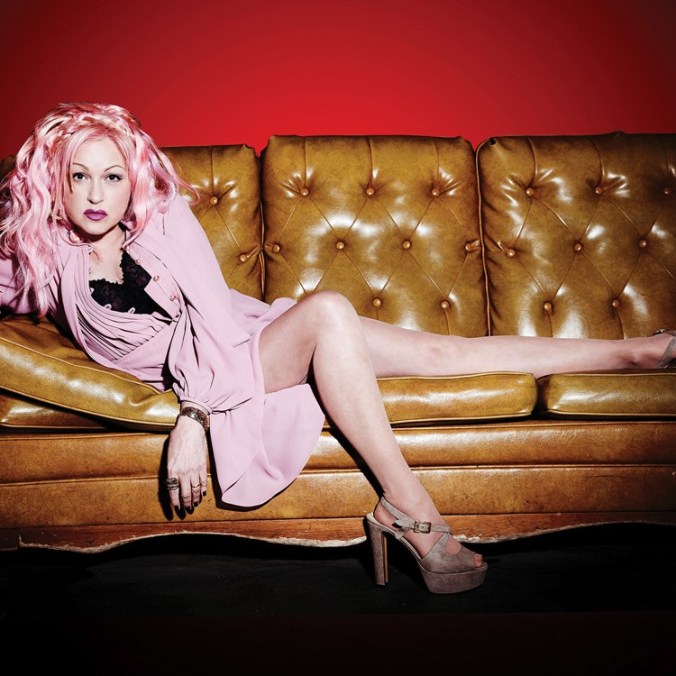 Cyndi Lauper will play a concert at the Michigan Theater on Saturday night!

For Pete’s Sake: A Pete Seeger Birthday Tribute and Memorial at The Ark. This celebration of the late folk legend features in-the-round performances, with lots of sing-alongs and between-song stories. The all-star lineup of area singer-songwriters includes Chris Buhalis, Judy Banker, Billy King, Paul Tinkerhess, Matt Watroba, Annie & Rod Capps, and Gemini, an acoustic quartet now that twin brothers Laszlo and Sandor Slomovits have been joined by San’s daughter Emily and bassist Jacob Warren. A benefit for the Ark. Wednesday at 8 p.m. at 316 S. Main in Ann Arbor. Tickets cost $15, available in advance at mutotix.com, theark.org, and 734-763-TKTS.

See “Station Eleven” author Emily St. John Mandel at WCC. Check out this reading by bestselling NYC-based writer whose 2014 novel, “Station Eleven,” was chosen as the 2015-16 Great Michigan Read (and it’s one of my favorite novels of recent years). Set in the aftermath of a future flu epidemic, the novel tells the story of a Hollywood star, his would-be savior, and a nomadic group of actors roaming the scattered outposts of the Great Lakes region. Wednesday at 7 p.m. at WCC’s Morris Lawrence Bldg., in Towsley Auditorium, 4800 E. Huron River Dr. in Ann Arbor. Free. END_OF_DOCUMENT_TOKEN_TO_BE_REPLACED 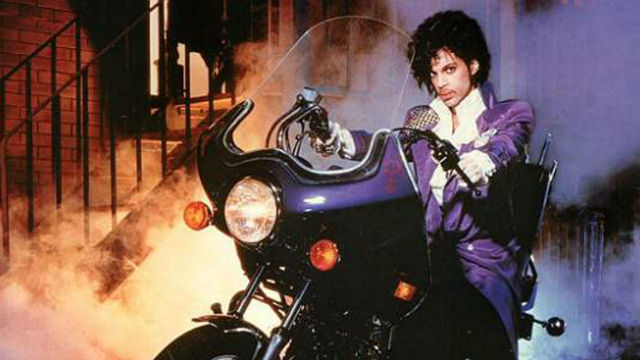 A special screening of Prince’s film, “Purple Rain,” has been scheduled at Ann Arbor’s Michigan Theater on Saturday.

“Rock of Ages” at Pioneer High School Theater Guild. Will Branner directs students in Christopher D’Arienzo and Ethan Popp’s Broadway musical comedy, set in L.A. in the 1980s, about an aspiring rocker who encounters friendship, deception, and love on his road to stardom. The score is comprised of iconic ’80s songs, such as “Hit Me with Your Best Shot,” “We’re Not Gonna Take It,” “The Final Countdown,” and other songs by Journey, Poison, Styx, and Bon Jovi. Friday and Saturday at 7:30 p.m. (through May 7, 2016) at PHS Schreiber Auditorium, 601 W. Stadium in Ann Arbor. Tickets cost $15 (seniors age 65 & over and students, $10), available in advance at showtix4u.com.

Ark highlights. Heywood Banks is the stage name of Howell native Stuart Mitchell, a very animated comedian known for his silly musical spoofs, goofy prop humor, and sight gags. Since adopting the nerdy, quietly psychotic Banks persona in the mid-80s, he has risen from a regional favorite to a national star. Friday at 8 p.m. at The Ark; tickets are $25.

On Saturday night, you can check out The Ben Daniels Band. You’ll hear artful, dynamic rock and roll by this Chelsea quintet, led by singer-songwriter and guitarist Daniels, whose influences range from Robert Johnson to Dylan to Jack White. Saturday at 8 p.m.; tickets cost $15.

Both shows happens at The Ark, 316 S. Main in Ann Arbor, and show tickets are available in advance at mutotix.com, theark.org, or 734-763-TKTS. END_OF_DOCUMENT_TOKEN_TO_BE_REPLACED 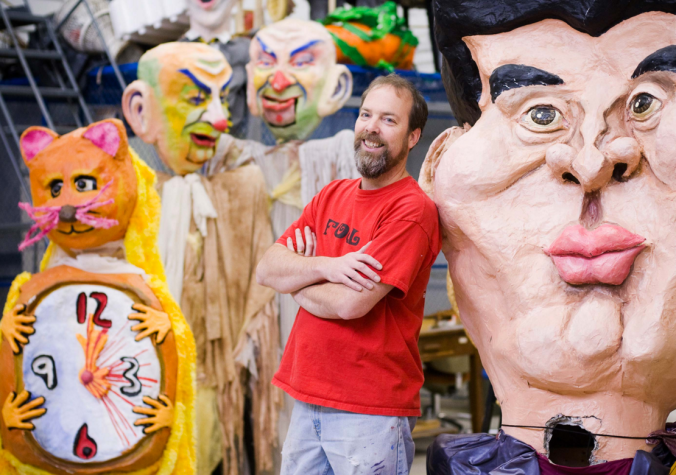 Mark Tucker, founder of FestiFools, will bring his students’ (and community artists’) giant puppets back to Ann Arbor’s downtown streets on Sunday for a parade. (Photo by Myra Klarman)

Lucinda Williams, Ani DiFranco and more, presented by The Ark. The Monday and Tuesday night Williams shows at The Ark are sold out – sorry to be the bearer of bad news – but 50 year old Ann Arbor folk venue has lots of other great artists on offer this week, including Wednesday’s 8 p.m. Brad Phillips Family Benefit show, featuring “The Voice” finalist Joshua Davis, Brian Vander Ark, Millish, and May Erlewine and Seth Bernard (tickets cost $25). The always-popular RFD Boys on Friday at 8 p.m. (tickets $11); and Ani DiFranco at the Michigan Theater, 603 E. Liberty St., on Saturday at 8 p.m. (tickets $30-$55). The Oh Hellos will play The Ark on Sunday night, but that, like the Williams shows, are already sold out. (Always have to keep your eye on that Ark calendar, folks!) The Ark’s located at 316 S. Main St. in Ann Arbor. To order tickets for shows, visit mutotix.com, theark.org, or call 734-763-TKTS.

See “Yellowman” playwright Dael Orlandersmith. Part of the U-M Institute for the Humanities Living Room Series. Orlandersmith is known for her Obie-winning drama “Beauty’s Daughter,” as well as her 2-actor, multi-character love story “Yellowman,” a 2002 Pulitzer Prize in Drama finalist (staged by Ann Arbor’s Performance Network Theatre in January 2015). This actress, poet, and playwright presents “Forever,” her semi-autobiographical one-woman drama about a pilgrimage to the famed Père Lachaise Cemetery in Paris – the final resting place of such artists as Marcel Proust, Oscar Wilde, and Jim Morrison – that prompts a meditation about the relation between the family we are born into and the family we choose. Thursday at 8 p.m. at Kerrytown Concert House, 415 N. Fifth Ave. in Ann Arbor. Free. END_OF_DOCUMENT_TOKEN_TO_BE_REPLACED

The cast of The Purple Rose Theatre’s production of Neil Simon’s “The Odd Couple.” (Photo by Sean Carter Photography)

After having launched my career as an arts reporter at The Ann Arbor News in 2004, I had become, over the course of nearly 12 years, the only long-term staff entertainment writer left standing in Ann Arbor when MLive Media Group announced a round of layoffs on January 6, 2016.

This time, though, my name was on the list, too.

Beyond my own personal circumstances, the layoff meant that artists/local arts organizations would take yet another hit in regard to press coverage, and thus find it even harder to share their triumphs, struggles, ambitions, and events with the community. Yes, the rise of social media has made it possible for arts organizations to be in regular contact with their subscriber list – but how, without minimal press coverage, will they now reach beyond that?  READ THE REST HERE

On night two of the annual Ann Arbor Folk Festival, it was all about the genre’s elders.

The annual musical buffet, held in Hill Auditorium and sold out Friday and Saturday, is the main fundraiser for The Ark, Ann Arbor’s nonprofit home for acoustic music and more.

Sure, the kids impressed during the first part of Saturday’s show, with deserved standing ovations for Michigan’s own The Accidentals, who opened the evening (the audience loved “Michigan and Again and Again”), and Joshua Davis of “The Voice” and Steppin In It fame. He did a fine job with his easygoing band, despite a muddy sound mix, especially on the Detroit/Flint ode “The Workingman’s Hymn.” The vocal quartet Darlingside (four guys gathered around a single mic) offered sweet, spot-on harmonies that pulled from folk, pop and barbershop traditions and earned another standing O.

Alan Doyle, best known as lead singer for Newfoundland’s beloved export Great Big Sea and touring with his more recent band, got the crowd fired up with Celtic-influenced songs like the bluesy “Testify (Take Me To The River)” and the rowdy GBS-style drinking tune “1,2,3,4” which might as well be subtitled “Whiskey Whiskey.” Much to the delight of this Great Big Sea fan, he also included the GBS song “Ordinary Day” as the capstone of his set. The only problem here was over-amplification – the vocals were on the unintelligible side, though part of the problem was probably Doyle’s charming but thick accent.

But after intermission was when the night really began to sound like a good old-fashioned folk music revival. END_OF_DOCUMENT_TOKEN_TO_BE_REPLACED

One thing you can always count on at the annual Ann Arbor Folk Festival, a fundraiser for the much-loved downtown acoustic music venue The Ark, is that you’re guaranteed two nights of great music, even if you’ve never heard of some of the bands on the bill.

This year’s Folk Festival – the 39th annual, and marking the end of The Ark’s 50-year celebration – kicked off Friday in Hill Auditorium.

Among Friday’s performers, City and Colour had previously played the Folk Festival in 2013. Revered British singer/guitarist/songwriter Richard Thompson has countless local appearances to his credit. Yo La Tengo has been performing around these parts for nearly three decades, and the Ben Daniels Band is from neighboring Chelsea.

But The Oh Hellos, Nora Jane Struthers & The Party Line or Penny & Sparrow? Never heard of them? Well, that’s kind of the point. With the Ann Arbor Folk Festival, it’s as much about the bands and performers you know as those you don’t. If you go, you’re bound to find some new favorites, and most of them will be returning to The Ark for full shows later in the year.

For me, one litmus test of the Folk Festival lineup is which of the bands made a big enough impression that I would be willing to catch them solo. So who made the cut? END_OF_DOCUMENT_TOKEN_TO_BE_REPLACED