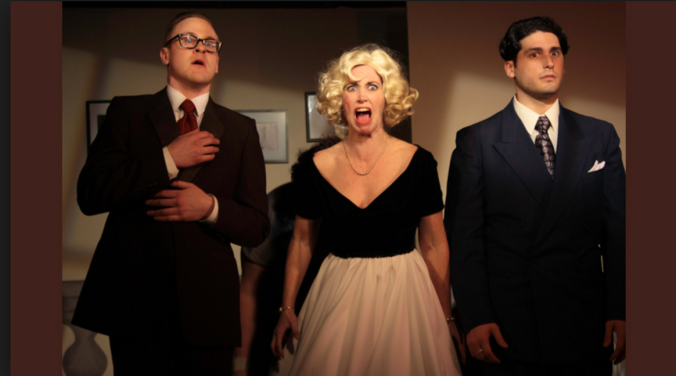 The Ringwald Theater’s world premiere production of “The Hung Man” pokes fun at the films of Alfred Hitchcock.

Being a cinephile who’s watched a lot of Hitchcock classics isn’t necessary for enjoying the world premiere production of Ian Bonner and Marty Shea’s The Hung Man at Ferndale’s Ringwald Theatre – but it does make the show even more deliciously fun.

Like Hitchcock’s “Rope,” The Hung Man takes place in the apartment of two hubristic men who appear to be hiding bodily proof of their crime in a trunk while also hosting a dinner party. Soon, characters who look a lot like the couple at the center of “Rear Window” arrive: wheelchair-bound Jimmy (Joel Mitchell, doing a spot-on Jimmy Stewart impression), with his leg in a hilariously enormous cast; and blond, self-assured ice princess Grace (Christa Coulter), who can’t figure out why her fiancee and host, John (Vince Kelley), seems far more interested in his roommate Farley (Richard Payton) than in her. And rounding out the party is John’s hyper-critical mother, Mrs. Collier (Joe Bailey, decorated in what’s practically clown lipstick), who enters the scene like a bull in a china shop.

As I mentioned, The Hung Man offers classic movie fans tons of opportunities to pick up on cheeky little references: the man in the building across the street who reportedly hung himself is George Kaplan – the fictional man Cary Grant is mistaken for in “North by Northwest”; Grace is repeatedly pecked at by menacing avians, a la “The Birds”; Jimmy brays “Hee Haw,” as Jimmy Stewart does in “It’s a Wonderful Life”; Grace is accused of thinking she’s “like the Princess of Monaco” when, of course, actress Grace Kelly held that title in real life; and there are passing references to “To Catch a Thief,” “Psycho,” “Vertigo” and more Hitchcock classics.

But in the end, film shout-outs aside, Ringwald’s go-for-broke ensemble, which seems to be having the time of its life on stage, is what really makes this Hitchcock mash-up so laugh-out-loud hysterical, particularly in the 90 minute play’s second act. Director Dyan Bailey seems to sustain the feel of a comedy sketch throughout, so that even when actors “break” (out of character, usually due to laughter), it only adds to the show’s joy instead of yanking you from its world. READ THE REST HERE

One thought on “My EncoreMichigan.com review of the Ringwald’s Hitchcock parody, ‘The Hung Man’”