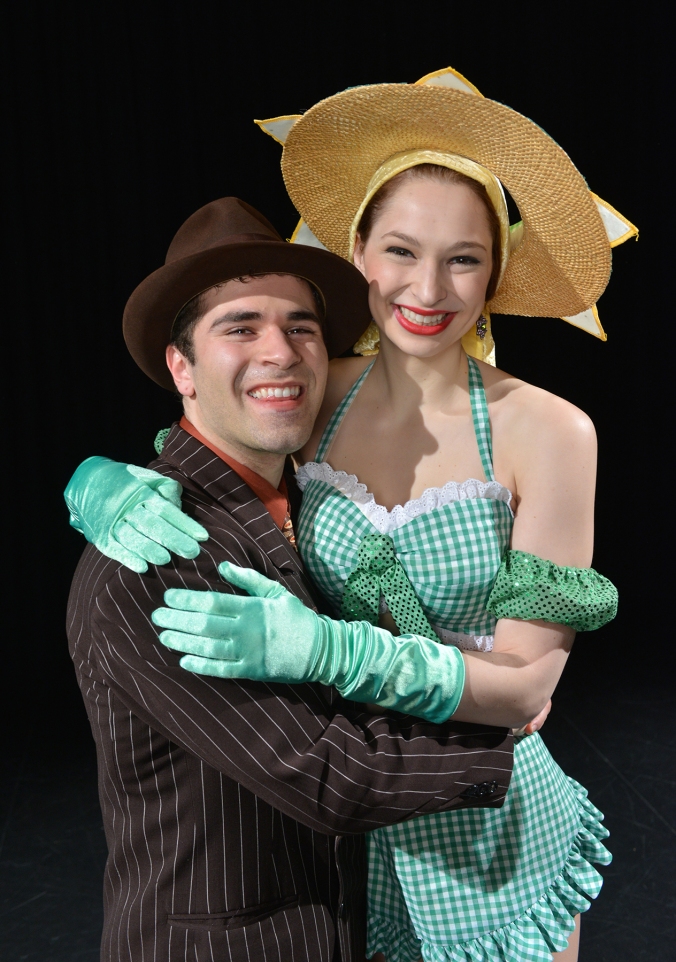 One of the biggest laugh lines in U-M’s new production of “Guys and Dolls” belongs to Miss Adelaide (Hannah Flam), who says, after her gambling fiance Nathan Detroit (Joseph Sammour) stands her up on the night of their scheduled elopement, “Tell him I never want to talk to him again, and have him call me here.”

That’s the crux of “Guys,” of course. Based on the stories of Damon Runyon, with a book by Jo Swerling and Abe Burrows, and music and lyrics by Frank Loesser, the show explores the comical ways that love inspires us to ignore logic and, by extension, act in ways that seem to run counter to our self-interest.

Set in a cartoonish version of 1950s New York – scenic director Edward T. Morris designed a stage striped in shades of blue and purple that eventually climb up the backdrop and form a New York skyline – “Guys” tells the story of Detroit, who struggles to find a venue for his floating crap game just as his long-suffering fiancee of 14 years, nightclub performer Adelaide, pushes him to finally set a date for the wedding; and big-time roller Sky Masterson (Will Branner), who makes a $1,000 bet that he can get teetotaling missionary Sarah Brown (Solea Pfeiffer) to accompany him to Cuba.

Mark Madama directs U-M’s 2 1/2 hour production of “Guys,” but the first thing likely to jump out at you – and I mean that literally – is Mara Newbery Greer’s sharply polished choreography. From the humor-infused “Runyonland” opening (featuring a not-so-blind beggar, and a male stroller who won’t compromise his exaggeratedly long gait for any reason); to Adelaide and the Hot Box Girls’ flirty, sexy show numbers; to a smoking hot dance floor in Havana; to the one that beats them all for sheer athleticism and thrills, “The Crapshooter’s Dance/Luck Be a Lady,” Greer gives you plenty to watch while hearing the show’s beloved score.

Which brings us to music director Cynthia Kortman Westphal, who helms the production’s outstanding orchestra, while Al Hurschman designed the show’s sound. (On opening night, occasional microphone problems plagued the show, but the performers played through admirably.)

Lighting designer Mark Allen Berg illuminates Morris’ set, which also featured three giant, concentric purple frames (with the names of movie theaters, Broadway theaters, and era-specific products painted onto them); a two-dimensional, painted city block (which includes the famous Katz’s Deli) that descends from above; and Adelaide’s stage, which appears for the Hot Box numbers. Finally, costume designer Jessica Hahn – with help from Michayla Van Treeck, who designed the “Havana Ladies,” and wig designer Erin Kennedy Lunsford – takes pains to not go too far into cartoonish Runyonland, using the stage set’s palette as a foundation, and dressing the characters in an extra-snappy version of reality (men’s suits in plaids and stripes, and women’s dresses that are flowy, sleek, and feminine).

While Madama’s production of “Guys” features a cast of performers who nail the challenging choreography, and hit all the right notes with apparent ease, this wasn’t a show – like many I’ve seen at U-M – that made me want to stop strangers in the street, grab them by the shoulders, and tell them they really, really needed to see this show. Why? For one thing, as accomplished as these student performers are as vocalists and dancers, I often didn’t feel I was seeing them emotionally and intellectually working through what they were singing.

But I’ll also offer this long-view observation: I think these talented young actors may feel so much reverence for classic shows like “Guys and Dolls,” and last year’s production of “The Music Man,” that it renders the works, and their iconic characters, emotionally elusive; and thus the shows become well-oiled machines that lack a beating heart.

For with the exception of “Cabaret,” the U-M productions that have been the most electrifying in recent years – “American Idiot,” “Caroline, or Change,” “Rent,” “Ragtime,” etc. – have been newer shows. And I can’t help but wonder if that’s because the student performers connect more easily, and more viscerally, with contemporary works that aren’t yet part of the American musical theater canon.

Regardless, there are certainly impressive performances in “Guys,” but Flam, hands down, runs anchor. As a woman who physically towers over not just the Hot Box Girls, but Nathan and his fellow gamblers, too, Flam makes her Adelaide a woman who’s wholly, unapologetically comfortable in her own skin, as well as in her bad choices. You could set your watch by Flam’s impeccable comic timing, and the night’s biggest laughs belong to her.

Meanwhile, Pfeiffer serves up a vocal knockout courtesy of “If I Were a Bell”; Noah Wisebart (as Nicely-Nicely Johnson) and the ensemble execute a really satisfying take on “Sit Down, You’re Rockin’ the Boat”; and Cameron Jones, as Arvide, gets the chance to shine in the stripped-down, quietly moving solo, “More I Cannot Wish You.”

So while I must confess that as I watched “Guys,” I pondered how Sky and Sarah appear to have one of the most doomed marriages in musical theater history – the foundation seems shaky, to say the least – I also left with a reinvigorated appreciation for the score. There’s so much beauty and wit and charm in it that, like Miss Adelaide, you’re often ready and willing to look beyond the shortcomings of any particular production.

U-M musical theater department’s production of “Guys and Dolls” plays at the Power Center, with one remaining performance on Sunday, April 17, 2016 at 2 p.m. To check on ticket availability, visit http://www.music.umich.edu or call 734-764-2538.

One thought on “U-M’s ‘Guys and Dolls’ nails choreography and notes, but feels emotionally flat”