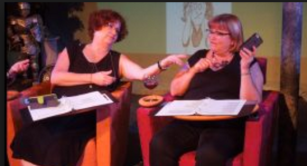 Judi Schram’s What Am I Doing Here? now being staged at Ann Arbor’s Yellow Barn in a joint production of Theatre Nova and Papa Weez, starts with four mature, dressed-in-black women entering the stage holding full wine glasses, plus a bottle for refills during the show.

And just like that, as each actress took a seat in an armchair, I felt cozy and comfortable in the company of ladies I already liked.

Drawn from material published on Schram’s blog, “What Am I Doing Here?” is a reader’s theater show – with the actresses reading from scripts – that takes various aspects of aging as its subject.

Broken up into chapters like “Memory,” “Doctors,” “Technology,” and more, the 75 minute show is built on Schram’s lighthearted poems, written in the style and spirit of Shel Silverstein’s work (as she openly acknowledges early on). Dieting, Spanx, not recognizing yourself in the mirror, absent-mindedness, hot flashes, mammograms, taking care of children and aging parents simultaneously, HGTV binge-watching, and prescriptions are among the topics tackled, and projected illustrations from Schram’s book “Lights Out in the Attic” (another nod to Silverstein) provide the show’s visual backdrop.

A problem inevitably arises, though, when the poems, which share a common structure and tone, start to feel redundant. Yes, they address different subjects, but as each builds toward a kind of punchline, you can’t help but yearn for more variety and bite.  READ THE REST HERE