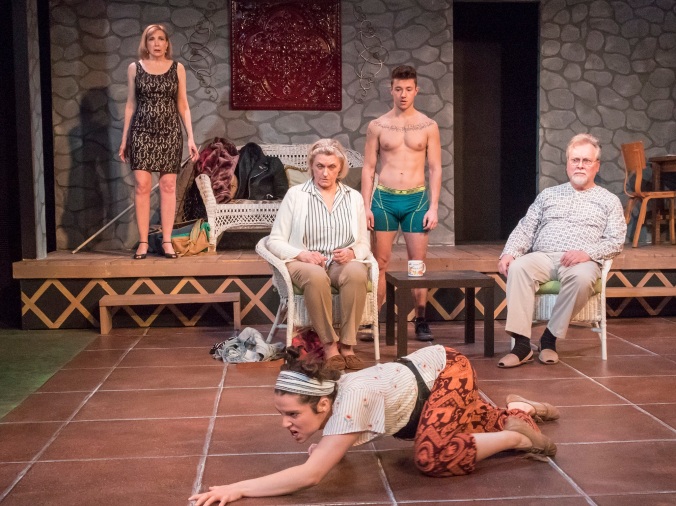 The cast of Open Book Theatre’s production of “Vanya and Sonia and Masha and Spike.” (Photo by Jan Cartwright)

Years ago, when my husband and I had just suffered through a stiff, all-too-reverent production of a Chekhov play, he pronounced himself done-ski with the iconic Russian dramatist, arguing that life was simply too short for “Uncle Vanya.”

Which is one reason I think he’d really enjoy Christopher Durang’s witty “Vanya and Sonia and Masha and Spike,” now being staged at Trenton’s Open Book Theatre.

Not that you have to be well-versed in Chekhov to laugh loudly and often while watching Durang’s play; but if, by chance, you are familiar with the likes of “The Seagull” and “The Cherry Orchard,” the characters on stage, as well as their charged interactions and existential struggles, will feel all the more familiar – albeit with a contemporary twist.

Set at a farmhouse in Bucks County, Pennsylvania, middle-aged, gay Vanya (Lindel Salow) and his adopted sister Sonia (Connie Cowper) sit and have the conversation they likely have every day of their lives: why their professor parents named the family’s three children after Chekhov characters; arguing about whether or not a dozen cherry trees on the property qualifies as an “orchard”; debating whether Sonia actually harbors feelings of romantic love for Vanya, or if this just the product of their sustained cohabitation; and passing judgment on their sister Masha (Wendy Katz Hiller) for selfishly abandoning their ailing, elderly parents to pursue movie stardom years ago, while Sonia and Vanya stayed on, working as their parents’ caretakers.

Soon, however – following some emphatically dramatic prognosticating by the cleaning woman named, of course, Cassandra (Alexis Barrera) – Masha arrives at the house with a hunky young side of beef named Spike (Kyle Kelley) in tow. Masha, as the only family member with an income, has been paying for everything related to the farmhouse for years, but she announces that she’s decided to sell it, to Vanya and Sonia’s dismay; and Masha panics when a young woman who lives nearby, fittingly named Nina (Anna Doyle), catches Spike’s attention.

Director Angie Kane Ferrante guides this two-hour comic drama deftly, so that both its raucously funny bits and its serious-as-a-heart-attack moments not only shine, but tonally work together in tandem.

Salow and Cowper are pitch-perfect as bored, static, fondly bickering siblings who did their familial duty, only to find their lives half over and as-yet-unlived. (I pictured their Vanya and Sonia as conjoined twins in a Beckett play.) Hiller has a ball playing the childish, desperate-for-attention Masha, but she also gives the character depth as we see her clawing to hang onto the last vestiges of youth. Barrera brings a whirling, vibrant physicality to Cassandra, who shifts between overblown soothsayer and caustic servant in the blink of an eye; Doyle seems almost angelic as the wide-eyed innocent who gets caught up in this family’s drama; and Kelley certainly looks the part of a guy who almost got cast for “Entourage 2.” As Spike, Kelley must parade around the stage in various states of undress, exuding confidence and sexuality – which he absolutely does; but Kelley doesn’t fare quite as well when delivering Durang’s dialogue, which sometimes sounds more flatly recited than lived-in and organic.

Eric Niece’s set design, with a painted gray stone backdrop and a brown tiled floor, furnished simply with white wicker chairs and mismatched, sundry pieces, suggests something wholly Chekhovian: that this farmhouse was once a tasteful refuge for elites, but it has since begun its descent into a state of decay. Cheryl Zemke’s thoughtful costume design shows us how each character wants the world to see (or not see) him/her, until a neighbor’s costume party turns their self-perceptions and family hierarchies on their head; and Harley Miah’s lighting not only fulfills the illusion of time passing within the confines of the story, but it also subtly underlines when hard truths come out in the harsh light of day (so to speak).

Admittedly, the show, though literate and quite witty, is not perfect. Durang writes a funny, cry-in-the-wilderness rant for Vanya near show’s end that goes on for too long, and thus ends up sounding like the extended dance remix of “Get off my lawn!” This is unfortunate, because the point Vanya makes – as skillfully delivered here by Salow – is a sharply poignant and powerful one; one we desperately need to hear and think about in this, our age of both constant connectedness and disconnectedness. Yes, the overall message gets through nonetheless, but it’s inevitably diluted, diminished somewhat by the weight of its own good intentions.

Generally, though, Durang captures the spirit of Chekhov’s work, which often took middle-age ennui as its primary subject. With the end in sight, Vanya and Sonia regret the fact that, because they stayed in the family home, they “never lived”; but Masha, for all her marriages (five) and Hollywood success, ends up feeling the exact same way, as she finds herself alone once more.

This may seem a bleak point of connection for the siblings, but being sad together beats being sad in isolation any day.

And really, a takeaway rarely gets more Chekhovian than THAT.

“Vanya and Sonia and Masha and Spike” continues its run at Trenton’s Open Book Theatre through March 18. For showtimes and ticket information, visit http://openbooktheatrecompany.net.

One thought on “REVIEW: Open Book’s ‘Vanya and Sonia and Masha and Spike’ offers a hilarious spin on middle-aged angst”