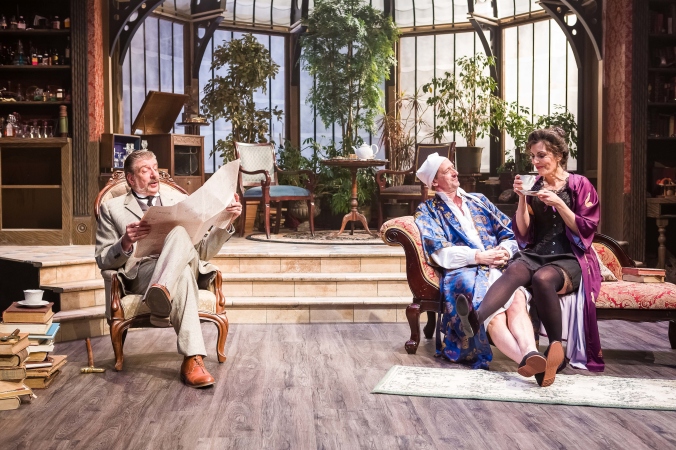 Paul Stroili, Mark Colson, and Sarab Kamoo in the world premiere production of David MacGregor’s “Sherlock Holmes and the Adventure of the Elusive Ear.” (Photo by Sean Carter Photography)

The real mystery now unfolding at Chelsea’s Purple Rose Theatre is how tried and true Sherlock Holmes fans will take to David MacGregor’s new theatrical riff, “Sherlock Holmes and the Adventure of the Elusive Ear.”

For although the comic drama (now having its world premiere at the Rose) is set in Holmes’ Victorian era London flat – at 221B Baker Street, presumably – it playfully explores all-too-timely questions about the gap between the private and the public self; touches on the sexual and economic lives of its familiar characters; and features things like swashbuckling women and “The Princess Bride” references.

“Ear” begins when a lazy morning spent among compatriots Dr. Watson (Paul Stroili), Holmes (Mark Colson), and Holmes’ secret lover Irene Adler (Sarab Kamoo) is interrupted by a visit from not-yet-famous Dutch painter Vincent Van Gogh (Tom Whalen), who has no money but wishes to hire Holmes for a case nonetheless. Soon, however, a mysterious, veiled woman in mourning named Marie Chartier (Caitlin Cavannaugh) also arrives at the flat to retain Holmes’ services, and in the course of Holmes discovering a link between these two clients, Oscar Wilde (Rusty Mewha) drops in.

Because, well, why not?

Obviously MacGregor knows his stuff regarding all-things-Holmes-ian – you hear the sleuth’s violin-playing off-stage early on, and mentions of his expensive cocaine habit come up more than once – but instead of writing something solemnly reverent, the playwright opted for something far more fanciful and fun.

That’s not to say there aren’t a few bumps in the road – we’ll get to those in a bit – but in the end, “Ear” (running time, 100 minutes) aims to give audiences a good time, and for the most part, it succeeds.

The first thing that wows you upon entering the theater, though, is Bartley H. Bauer’s gorgeous set design, meticulously outfitted with Danna Segrest’s richly detailed props. (You’ll want to pack your bags and move into Holmes’ flat yourself. The atrium, paired with the furnishings, are to die for.) Noele Stollmack’s lighting design further enhances our trip back in time, making the stage pictures look romantically nostalgic yet fully alive (partly by way of the light streaming through the aforementioned atrium); Brad Phillips’ sound design helps fill out the show’s sensory experience; and Suzanne Young’s Victorian Era costumes manage to look both luxe and a bit worn, thereby underscoring the idea that while Holmes and his compatriots enjoy and are accustomed to a certain high standard of living, they’re currently pressed for funds.

For as Watson points out, Holmes has been suffering a bit of a professional dry spell, such that his most recent adventures – such as “the case of the sleeping pussy cat” – aren’t exactly publication-worthy.

Stroili masterfully delivers this bit with the perfect mix of dry sarcasm and rational urgency, making the case for Holmes to drum up business somehow; more broadly, the actor’s take on Watson offers an impressively nuanced study of one of literature’s iconic “straight men.” Watson is, after all, the “everyman” stand-in for us all, so we must connect with him as he bears witness to the wonders of Holmes’ powers.

Similarly, Colson has a ball playing Holmes as a man of all-too-human appetites and faults. For as the play opens, he and Irene emerge from his room, unabashedly dressed in bedclothes (while teasing Watson about satisfying his own needs), and while he’s a genius detective, he can hardly be said to have a head for business.

“Ear”‘s whole cast is pretty marvelous, directed by Guy Sanville, and the actors strike just the right balance between honoring Holmes’ distinctive mythology (established by author Arthur Conan Doyle) and digging into some of its subtexts in comical ways. Plus, fans of MacGregor’s work who’ve watched his plays on the Rose’s stage before will note his integration of absinthe (similar to MacGregor’s “The Late Great Henry Boyle”) as well as his clever, wordplay-oriented sense of wit (the characters call Van Gogh a “lying Dutchman,” recalling the famous ghost ship the Flying Dutchman, and there’s a blink-and-you’ll-miss-it reference to the novel “The Curious Incident of the Dog in the Night Time”).

That said, the swordfight between Irene and Marie – the first act’s primary set piece (with music cues, altered lighting, etc.) – feels like a diverting bit of titillation (why do these women need to be in their undergarments to do battle, exactly?) more than a narrative necessity, and the use of slow motion during some exchanges only heightened my sense that the actresses, though otherwise excellent, aren’t wholly comfortable yet with the most complicated parts of the scene’s fight choreography.

Plus, the fight begins with Irene saying, “Terminator”-style, “En garde, bitch,” which was one of a few moments – along with “The Princess Bride” lines, faithfully echoed – that pulled me out of the play by virtue of feeling forced and self-conscious. Yet it’s interesting to note that an example of an authorial choice that also could have gone that way, but never quite does, is Oscar Wilde’s odd presence in this star-studded, “Love Boat” version of a Sherlock Holmes mystery. (Mewha injects a welcome bit of dryly witty energy when he arrives the second act.) Though Wilde also seems more a fanciful addition than a key character, there’s a really good reason why everyone in Victorian England, as well as MacGregor, wanted the brilliant and sassy wordsmith at their party.

Which brings me to my original question about how serious Sherlock fans are likely to respond to “Ear.” Unlike Conan Doyle’s original stories, “Ear”‘s mystery is primarily a vehicle for bringing these characters together instead of being the story’s raison d’être. For many scenes in the play have little to no mention of Van Gogh’s problem, and the resolution, when it arrives, is but a modest nod to Conan Doyle’s often-staggering reveals.

Yet for Sherlock fans who’d enjoy imagining Holmes not just as a human computer, but as a sexy, funny, flesh-and-blood man who’s compelled to keep playing a prescribed role (sitting with his fingers steepled, smoking his pipe) for his dazzled public, “Ear” offers an awfully agreeable diversion.

2 thoughts on “REVIEW: Purple Rose Theatre revisits an iconic sleuth in ‘Sherlock Holmes and the Adventure of the Elusive Ear’”