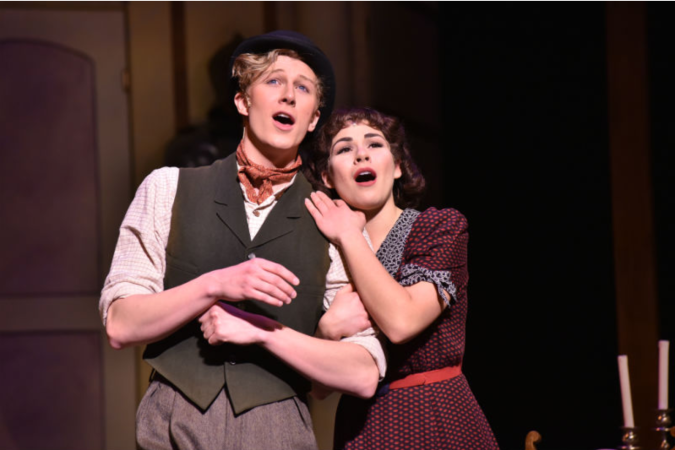 Elliott Styles as Bill Snibson and Sophie Madorsky as Sally in the U-M Department of Musical Theatre’s production of Me and My Girl playing at the Power Center April 12-15. (Photo by Peter Smith Photography)

While the 1937 British stage musical “Me and My Girl” – staged this past weekend by U-M’s musical theater department – isn’t well-known in America, theatergoers who saw it at the Power Center may have been put in mind of a show that is pretty famous in these parts: “My Fair Lady.”

For while that Lerner and Loewe classic focuses on a young Cockney woman who’s trained to speak and act like a society lady, “Me and My Girl” – with book and lyrics by L. Arthur Rose and Douglas Furber (revised by Stephen Fry, with contributions by Mike Ockrent), and music by Noel Gay – tells the story of a Cockney man, named Bill Snibson (Elliott Styles), who must go through a similar process in order to claim his hereditary right to the title Earl of Hereford.

Bill’s added wrinkle, however, is that he must not only change himself, but leave behind his lovably sweet Cockney girlfriend, Sally (Sophie Madorsky), which he doesn’t wish to do. But because the title’s executors – Maria, Duchess of Dene (Emilie Kouatchou) and Sir John Tremayne (Griffin Binnicker) – must be satisfied in order for Bill to become Earl, Sally tries to do the honorable thing and step aside.

Unless “Me and My Girl” audience members happened to remember Herman’s Hermits’ cover of Gay’s “Leaning on the Lamppost,” which became a minor hit in America in 1966 (long before it was added to “Me and My Girl” in 1985), or had seen the show’s first and only Broadway production (’86-’89), they likely didn’t recognize any of the songs from “Me and My Girl” – though the show produced a number of hits in Britain.

Not to worry, though. Those who attended this past weekend’s production will likely now be humming its signature act one closer, “The Lambeth Walk,” for days and weeks to come.

Indeed, along with the second act opener “The Sun Has Got His Hat On” – a Gay song also added to the show in ’85 – “The Lambeth Walk” is precisely the kind of splashy, joyous, all-hands-on-deck number that director/choreographer Linda Goodrich excels in creating.

It helps, of course, that she’s got such amazing young theater performers to execute her vision. From the leads to the ensemble players, the cast was terrific. McKenie Kurtz was deliciously hateful as Lady Jaqueline Carstone, the beautiful, shallow blonde villain who drops her engagement with Gerald Bolingbroke (Ben Walker) to pursue Bill, most blatantly via the slinky number “You Would If You Could.” Mardosky utterly charmed the crowd, both by way of “Once You Lose Your Heart” and her earnestly hilarious comic delivery (Bill: “My aunt’s a duchess. Do you know what that makes me?” Sally: “Dutch?”). And tall, lanky Styles, finally, not only made carrying a big, three hour musical on his shoulders look easy, but also cashed in on the show’s vaudevillian roots, executing several comic bits that might otherwise seem corny, but in his hands, became daffily fun. (I doubt, for instance, that anyone in the audience who comes across a bear-skin rug in the future will fail to remember Styles having an animated conversation with one.)

Arthur Ridley designed “Me and My Girl”’s lovely sets (and there are many varied locales for this show), including Hareford Hall’s library, where lighting designer Martijn Appelo helped create the illusion of ancestor portraits coming to life for “Song of Hareford.” Music director Catherine A. Walker led a top-notch orchestra, and actors’ vocals blended beautifully. Costume designer Jessica Hahn had a huge job, given the sheer size of the show, and number of costumes required (and paired with wigs, hair and makeup by Brittany Crinson), but she hit it out of the park, most noticeably with the singing-and-dancing ancestors. Finally, dialect and physical comedy coach Malcolm Tulip proved the perfect person for the job, ensuring that the distinctions between high and low English were clear, without veering into caricature, and that the show’s comic elements weren’t merely observed, but instead fully woven into the production’s DNA.

Yet with all these things going for it, “Me and My Girl” remains, as a show, more a pleasant, sunny diversion than a musical with meat on its bones.

This was precisely the point in 1937, of course, when the show premiered in beleaguered Britain, and one could easily argue that we’re in a similarly fraught time now. But even so, it’s not a show I’ll likely go out of my way to see again – not only because it merely goes skin-deep, but also because I’ll probably never see again a production of the show as well-executed as Goodrich’s.