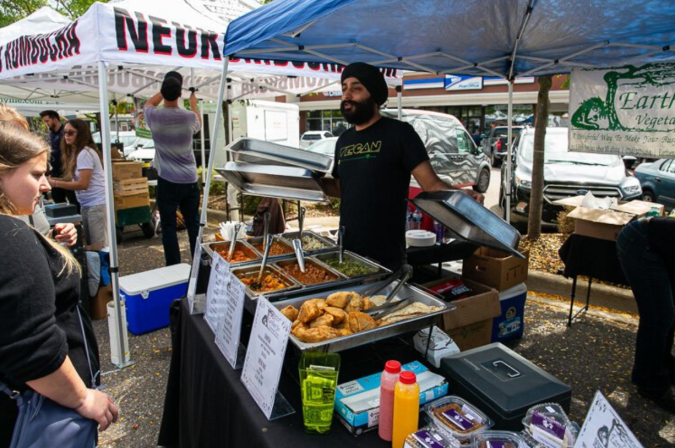 If you passed by downtown Farmington’s Riley Park on Sunday and spotted white tents, food trucks, and entertainers, you may have done a double-take and thought, “Wait … wasn’t the farmers’ market yesterday?”

It was, but the vibe of Sunday’s all-afternoon VegMichigan Free Festival had the same kind of energy and communal warmth.

With a variety of vegan-friendly vendors, a kids’ activity area, long tables set up under the pavilion (where attendees could sit and sample the vegan food on offer), and live music from Sinjon Smith, the festival drew a pretty big crowd, despite some raindrops.

“(My daughter) and my 10-year-old were mesmerized by (Clark the Juggler), who was quite the entertainer,” Farmington Hills resident Kristin Dwyer says. “They cuddled under the clouds watching, laughing, and talking. My son was even 45 minutes late to a play date because he didn’t want to leave the scene.”

This is the first year that downtown Farmington has played host to the four-year-old event, which previously called Livonia’s Madonna University home. Construction on Madonna’s campus this year necessitated a change of locale for the festival (which used to be scheduled in August and was then called VegMichigan SummerFest).

“We did a search,” says VegMichigan president Tom Progar. “When we looked at Riley Park, we just thought it was the perfect venue.” READ THE REST HERE