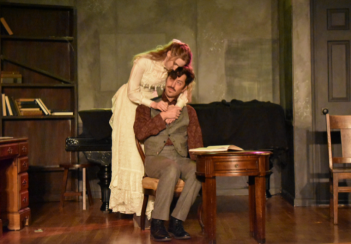 So it seems. For it’s far more comforting and palatable to believe that humans like ourselves simply aren’t capable of committing the very worst acts of violence and depravity.

But we are, of course. And this unnerving truth is precisely what drives Zettelmaier’s unconventional take on the Dracula story.

Set in London in 1895, in Dr. Jack Seward’s home, the play begins with the former asylum physician Seward (Jeffrey Miller) being visited by the ghost of Emily (Allyson Miko), the love of his life; and writer/Lyceum Theater business manager Bram Stoker (Zettelmaier), who’s perusing Seward’s journals for story material (that will eventually be used for Stoker’s landmark 1897 novel Dracula).

When a local inspector, Louis Carlysle (Jonathan Davidson), shows Seward that his mentor has just been brutally murdered — by way of a neck wound that suggests a death-by-ravenous-vampire — and he’s visited in the night by a mysterious figure cloaked in darkness (David Collins), Seward starts to question his own sanity, made cloudier by a months-old, asylum-inflicted open wound, and the morphine he must take daily to keep the pain at bay. READ THE REST HERE