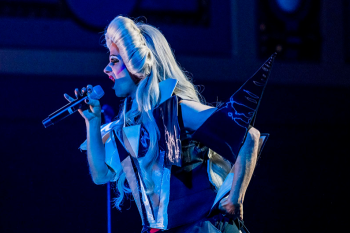 From where I sat, bold body art and piercings, asymmetrical haircuts, and statement eyeglasses abounded. And although about two decades have passed since Mitchell first created and performed in the groundbreaking show (and film) that would become his calling card, Hedwig and the Angry Inch, he not only rocked Hill Auditorium on his ongoing Origin of Love Tour but crowd-surfed, Superman-style, during an encore number.

But the two-hour concert kicked off with a direct reference from Hedwig, as powerhouse guest vocalist Amber Martin arrived first on stage and announced, “Ladies and gentlemen, whether you like it or not … John Cameron Mitchell!”

Dressed in Hedwig’s trademark blond wig — with two huge curls peeled back from each side of his face — and Erik Bergrin’s hyper-structural, black and white, “Transformer Cubism” armor dress, Mitchell opened by singing “The Origin of Love,” followed by a talk about the mythical origins of, well, “The Origin.” (Video designer Michael Zumbrun, meanwhile, standing stage-side, manually provided evocative, often hilarious visual backdrops for several of Mitchell’s stories and songs.)

Yet Mitchell also acknowledged that proceeds from his tour would go toward paying for his mother’s care, as she suffers from Alzheimer’s.

“I used to be going to hell for all this,” Mitchell quipped. “Now it’s paying her rent.” READ THE REST HERE